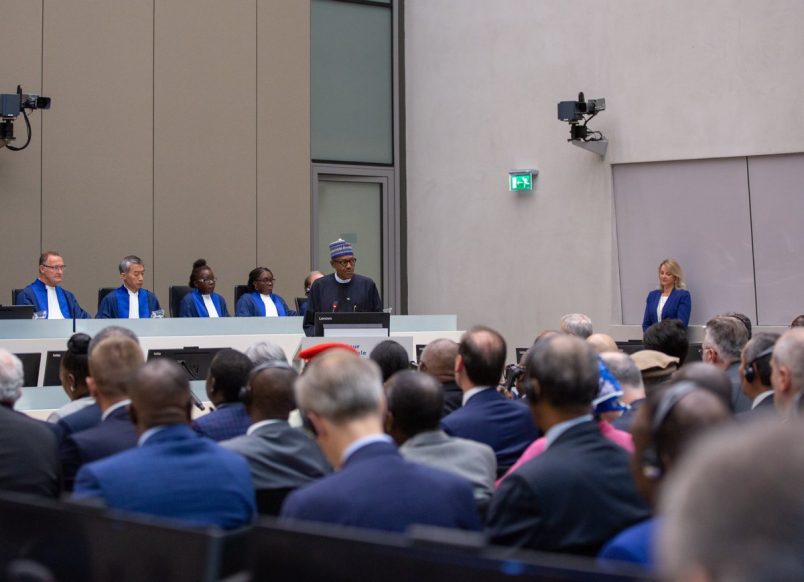 President Muhammadu Buhari praised the role of the International Criminal Court as a catalyst for a culture of justice around the world, while recommitting Nigeria to the court’s goals during a keynote speech delivered Tuesday at the ICC 20th anniversary commemoration in The Hague.

“As we know, the International Criminal Court was established twenty years ago as a global court, inspired by the Nuremberg trials of World War II war criminals, to hold people accountable for crimes against humanity, war crimes, crimes of genocide and aggression,” he said.

The ICC has given hope to so many, Buhari said, in a speech that encouraged other states to join the Rome Treaty that established and enables the court. The Nigerian leader, who was the only African president to attend the invitation-only event, noted that among the court’s greatest challenges are those nations that decline to be a party to the treaty and those who have removed themselves.

“With the alarming proliferation of the most serious crimes around the world, the ICC, and all that it stands for, is now needed more than ever, in ways that were unforeseeable to its founders,” he said. “The ICC may have been created at a time of optimism that it would not need to be utilized frequently, but, unfortunately, the increase in international crimes has only increased the Court’s relevance.”

The ICC remains a contentious issue among African nations, which have seen investigations target African leaders including Sudanese President Omar al-Bashir and Kenya’s President Uhuru Kenyatta. Burundi left the ICC treaty last year. Nigeria’s own history with the ICC following the 2011 elections was addressed by Buhari, who assured listeners that “all hands are on deck” to prevent tragic incidents in the country’s 2019 elections.

Buhari also met with Dutch Prime Minister Mark Rutt and attended a dinner hosted by Nigerian Judge Chile Eboe-Osuji, the President of the ICC.  A meeting with ICC Prosecutor Fatou Bensouda also was on the schedule, as well as roundtable discussions with Dutch CEOs who have business interests in Nigeria.