Home>Commentary>Obama speaks on Mandela, as much the message as the messenger
By Laureen Fagan - 18 July 2018 at 7:33 am 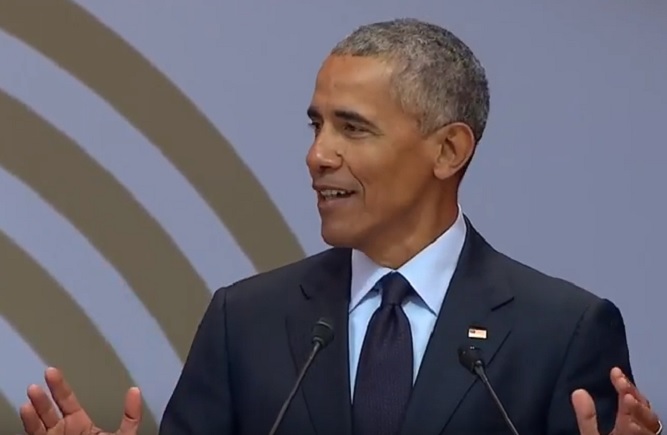 The sense of gravity in the moment was hard to miss, even with a friendly joke about former United States President Barack Obama’s dancing ability, as South African President Cyril Ramaphosa introduced the speaker to thousands gathered for the Mandela Lecture at Wanderers Stadium in Johannesburg.

The international community was still stunned by the developments from Helsinki, just hours after Obama’s successor met alone with Russian President Vladimir Putin and appeared at a press conference that raised anew the many questions on his fitness for office. The fresh alarm over U.S. President Donald Trump’s allegiances followed a disastrous meeting in London and the debacle of the NATO summit.

“We can no longer completely rely on the White House,” said German Foreign Minister Heiko Mass on Monday. The swift changes in Europe, in Africa, since the Obama years were not lost on the former president himself, and his remarks were driven by what Obama called the unimaginable pace of change.

Now – in what seemed like a much longer walk than the few steps to the podium, dwarfed by the oversized images of Mandela and the legacy of his own long walk – stood the 56-year-old Obama. Through the confluence of events that has always shaped history, in the perfect timing of a pivotal moment where vastly different visions of the future collide, Obama had returned to the world stage.

At the crossroads of history

The decision to invite Obama was announced back in April, as the Nelson Mandela Foundation chose a speaker for this year’s special centenary celebration of Mandela’s birth in Mvezo. “We thought to ourselves, ‘Who can best represent the legacy of Madiba? Who took the baton when he became president of his own country? Who would be able to deal with issues of democracy in a world ripped apart by corruption?’” said foundation executive Sello Hatang.

Obama, with his Kenyan heritage and his keen eye for nuance in global affairs, seemed the perfect fit with the theme of finding the legacy of Madiba within ourselves and building a value-based society. In his signature deliberative manner, he first structured the arc of history and human progress that has spanned the Mandela century before locating within it the rapid global relapse into fear and authoritarianism that has marked an era of conflict and climate, economic dislocation and migration.

“We now stand at a crossroads – a moment in time at which two very different visions of humanity’s future compete for the hearts and the minds of citizens around the world. Two different stories, two different narratives about who we are and who we should be. How should we respond?

“Should we see that wave of hope that we felt with Madiba’s release from prison, from the Berlin Wall coming down – should we see that hope that we had as naïve and misguided?” Obama asked. “Should we understand the last 25 years of global integration as nothing more than a detour from the previous inevitable cycle of history – where might makes right, and politics is a hostile competition between tribes and races and religions, and nations compete in a zero-sum game, constantly teetering on the edge of conflict until full-blown war breaks out? Is that what we think?”

Of course it wasn’t, but rarely, it seemed, have the stars aligned to create the space for a message of hope with a clarity and force equal in measure to the moment in which it was needed. On a brisk winter day in South Africa, Obama was that messenger rising to the task of articulating the Mandela vision so that it reverberated beyond the walls of Wanderers Stadium as he knew – at this moment – it must.

No choice but to move forward

Yet beyond the nearly pitch-perfect eloquence of the former president, now head of a foundation engaged in African youth leadership, was the idea that Obama himself was as much the message as the messenger. Analysts may have noted how he dismantled the priorities of the Trump administration and the impulses that drive them, just as they do in Italy or Hungary, Egypt or China. They heard his appeal for protecting democratic freedoms on the African continent and beyond; they heard his soft concession over an “ill-advised” intervention in Iraq, although with the unspoken shadow of Libya falling on those words.

What Obama didn’t need to use words for, though, was the power of his presence. His visibility itself served as a more proximal witness to the “better story” of humanity that he described, that Mandela advanced in his own defining day, as Obama conveyed a sense of constancy as sure as the North Star.

It was an antidote to the creeping cynicism that might tempt us, as he phrased it, to “believe that recent shifts in global politics are too powerful to push back; that the pendulum has swung permanently.”

Things may go backwards for a while, as he said, but the light of these immutable truths – of democracy, the rule of law, civil rights and inherent human dignity – remain to help us navigate the dark passages. Just as Mandela saw the highest democratic principles as his own, as the guiding lights of a human inheritance that he had yet to experience, so too must we choose them at this crossroads in history.

“I believe we have no choice but to move forward; that those of us who believe in democracy and civil rights and a common humanity have a better story to tell,” Obama said.

That story is rooted in hope.