Home>News>Spain's CCOO union calls attention to Morocco-Ceuta border woes
By AT editor - 19 July 2018 at 5:13 am 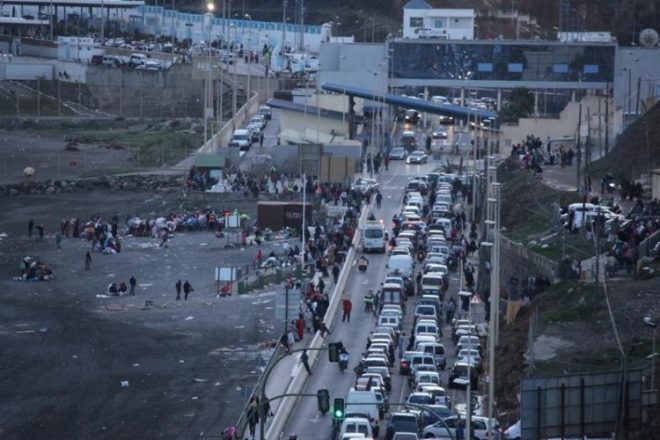 A labor union in Spain is calling on its government to address security and working conditions in Ceuta, the enclave belonging to Spain adjacent to Morocco on the North African coast.

In a letter sent by the Confederación Sindical de Comisiones Obreras (CCOO), the group appealed for a second border crossing to ease congestion and improve safety for thousands of porters who manually carry shipped goods into Morocco.

For more than a year, Moroccan activists have held protests demanding improvements for porters, who say they are frequently harassed and face violence while trying to do their jobs. Stampedes at the border crossing gates, which have been described as similar to Israeli-Palestinian border controls, claim a number of lives each year, most recently in January when two women died.

Morocco launched an investigation this month into the working conditions of an estimated 8,500 porters, many of whom are women and children carrying goods.

CCOO described the situation as urgent, with domestic trade impacted by the obstacles posed at the border bottleneck and the lack of adequate security personnel. The trade union also asked the government to curb illegal and unregulated employment, in order to improve worker protections.

With more than 14,000 unemployed people and 40 percent of the population at risk, the CCOO said, it is critical for authorities to stop turning a blind eye on the illegal labor practices.

Ceuta is one of two enclaves that, although physically located on the opposite side of the Mediterranean Sea,, are Spanish territories; the other is Melilla. Because the enclaves are European Union territory, they are frequent targets for illegal migration as well.