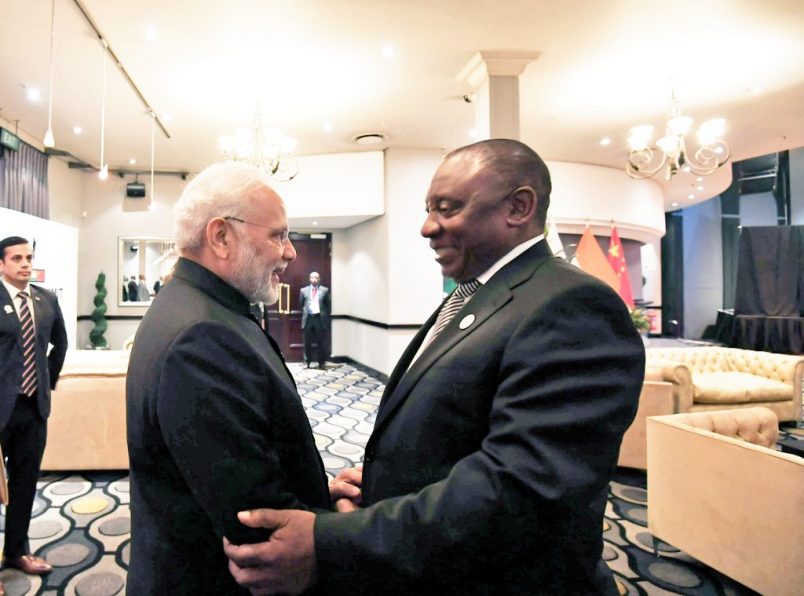 Prime Minister Narendra Modi of India has arrived for the BRICS Summit in South Africa, where he was greeted by South African President Cyril Ramaphosa.

Modi arrived in Johannesburg after a two-day visit in Uganda, where he met with President Yoweri Museveni, and a stop in Rwanda for talks with President Paul Kagame.

While in Kampala, Modi addressed the Ugandan parliament and announced USD$205 million in loans availability to support electric power capacity and agriculture.

“India is proud to be Africa’s partner,” Modi said. “As in the past, we will continue to support the aspirations of the people of Uganda – in agriculture and health care, education and training, infrastructure and energy, capacity building in government and training in defense.”

The new amounts are part of what Modi said is now about $11 billion in credit lines across 40 African countries, as India continues to build its relationships with the continent. Modi said that between President Ram Nath Kovind, Vice President Venkaiah Naidu and himself, they have now made visits to at least 25 countries across Africa and plan 18 new embassies by 2021.

Those additions, including Somalia and Swaziland, will bring to 47 the number of countries with a permanent Indian diplomatic mission as Modi’s government seeks to expand its influence. In Uganda, the prime minister listed 10 strategic principles to guide Indian-African engagement, with an emphasis on climate change and achieving Sustainable Development Goals.

Modi’s African tour comes amid troubles at home, where he has faced allegations of possible war crimes during his tenure in Jammu and Kashmir after atrocities were brought to light by a United Nations report earlier this year.