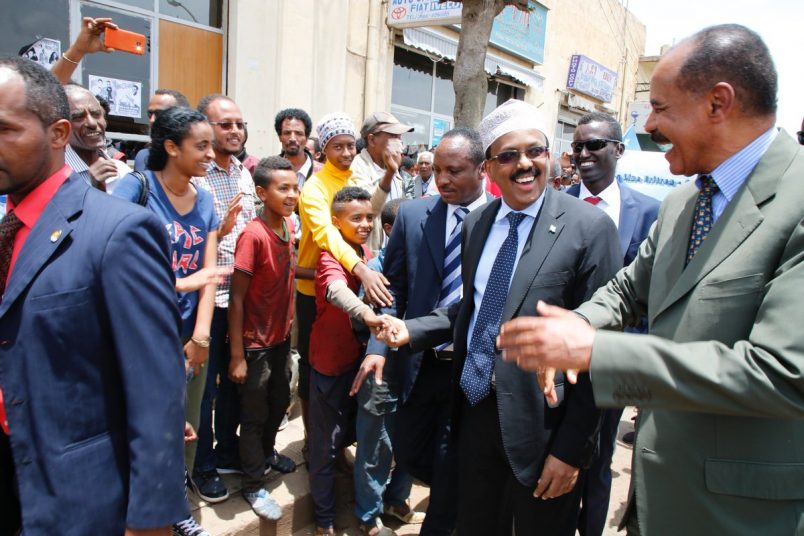 Somalia’s President Mohamed Farmaajo arrived in Asmara on Saturday to begin a three-day visit with President Isaias Afwerki and members of his administration.

The visit to the small Horn of Africa neighbor is the first for a Somali leader since Eritrea declared its independence from Ethiopia in 1993, and represents a step forward between Somalia and Eritrea, which have not had friendly relations for more than a decade.

The visit comes at the invitation of Afwerki, who met his Somali counterpart at the airport amid much celebration. Crowds of Eritreans lined the streets of Asmara, according to the Eritrean information ministry.

Farmaajo is expected to discuss bilateral and regional issues with Afwerki. He will also tour development sites in Eritrea. His delegation also includes the Minister of Foreign Affairs, and the ministers of tourism, transportation and other agencies.

The Somalia-Eritrea visit is the latest in a string of high-profile visits among leaders in a region where the political landscape is shifting, both among its own countries and international players including China, Turkey and the Gulf states.

It follows on the successful peace mission between Afwerki and Ethiopian Prime Minister Abiy Ahmed, and on Abiy’s own trade- and economy-focused visit to Somalia last month.