Home>News>South Sudan deal sees both cautious optimism and rejection
By AT editor - 7 August 2018 at 6:45 am 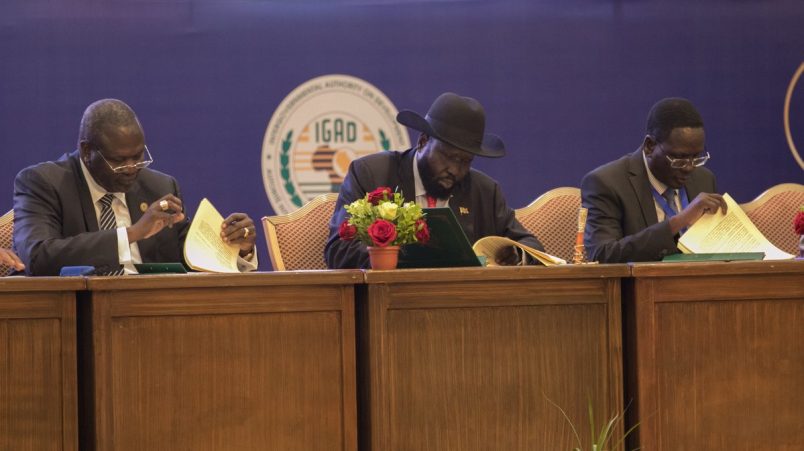 While some observers noted celebration in the streets of Juba following news of a South Sudan peace deal Sunday night, others are more cautiously optimistic on whether this power-sharing agreement will hold.

Among them would be opposition leader Riek Machar himself, who acknowledged there was still much work to do on Monday after the IGAD-brokered deal was signed.

“We are not saying that a good peace has been signed,” Machar said. “We are saying that even if some clauses look inappropriate and uncompromising, let’s give our people a breathing space while we work through those loopholes. They’ve suffered too much.”

There’s no question that’s true, as the South Sudanese have known five years of civil war and humanitarian crisis since the split between President Salva Kiir and Machar, his former vice president, in 2013. There is also a long track record of negotiation failures and ceasefire violations, with opposing sides trading accusations about who’s responsible. Yet there’s hope that this time will be different.

“This peace deal will not collapse,” Kiir said. “The South Sudanese have agreed to its implementation.”

The problem is that’s not entirely true, as at least two factions – the People’s Democratic Movement and the National Salvation Front –say they’ve refused the deal. Nonetheless, there’s room for optimism as Kiir agreed to a deal that would see Machar and four other vice presidents lead South Sudan anew.

“It’s very much a starting point but it’s a starting point which I think a lot of us didn’t think we would see perhaps two months ago,” said David Shearer, chief of the United Nations mission in South Sudan.