Home>News>Eritrean delegation meets with Somali president
By AT editor - 13 August 2018 at 10:26 pm 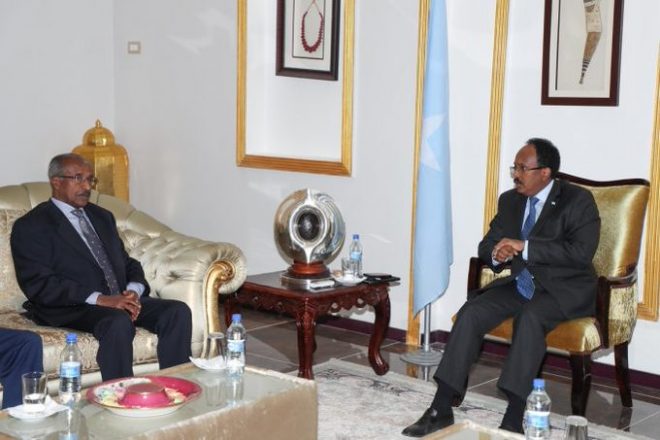 Somalia’s President Mohamed Farmaajo welcomed a delegation from Eritrea on Monday, as the Horn of Africa neighbors move forward in re-establishing diplomatic relations.

The official visit to Mogadishu, which included Eritrean Foreign Minister Osman Saleh and Yemane Gebreab, top adviser to President Isaias Afwerki, sought to advance a comprehensive cooperation signed during Farmaajo’s visit to Asmara on July 30, according to the Eritrean government.

The two countries, known for historically frosty relations, have agreed to develop political, economic, social and cultural initiatives, as well as defense and security cooperation to promote stability in the region. They also will exchange ambassadors and promote bilateral trade and investment.

Farmaajo was joined by Somali Prime Minister Hassan Ali Khaire as he discussed Somalia’s progress with the Afwerki delegation. “Regional cooperation for stability and economic progress is crucial for common prosperity of the Horn,” Khaire said.

Farmaajo’s visit to Eritrea in July was the first for a Somali leader since Eritrea declared its independence from Ethiopia in 1993, and the latest in a string of diplomatic shifts in the region. It followed on the successful peace mission between Afwerki and Ethiopian Prime Minister Abiy Ahmed in June.

It’s also met with some regional backlash from Djibouti, which lies between Eritrea and Somalia. Djibouti remains immersed in a decade-long border dispute with Eritrea, and has bristled at  Somalia’s recent call to end United States sanctions imposed on Asmara.