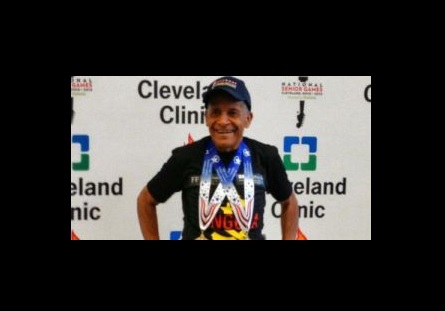 In Angola, President João Lourenço was among thousands of admirers mourning the death of beloved bicycling enthusiast Alberto da Silva, who pursued his love of riding until the end of his 95 years.

The cyclist known as “Pepino” competed at the National Senior Games in the United States, winning the competition in the 20- and 40-kilometer races in 2013 in Cleveland – and, perhaps not surprisingly, having an edge because he was the only person to challenge the 40K road race in his 90-and-older category.

It was a success he vowed he’d make after finishing fifth in the 2009 contest, representing the state of Utah at the time, and he is second only to American Larry Johnson in holding the all-time Senior Games 40K event record.

But if “Pepino” had some passing fame abroad, it was at home where his name was cherished for his love of the sport, and his commitment to children and other charitable causes. The news of his death on Saturday in the Benguela province brought grief to the nation.

“With deep consternation, I learned of the physical passing of the veteran cyclist Alberto da Silva, a carpenter by profession,” said Lourenço in a statement shared by ANGOP, Angola’s state news agency.

“We would like your legacy of humility, willpower, discipline, dedication to sport and love of our country to serve as an example for present and future generations, as they are the best expression of the real qualities of the Angolan people,” he added.

The funeral services for “Pepino” will be held Tuesday.