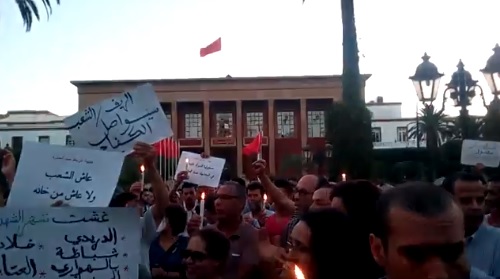 Nearly 200 prisoners associated with the Hirak political movement in Morocco’s Rif region were set for release Tuesday after King Mohammed VI granted their pardons as part of an annual Eid Al Adha tradition.

The 188 prisoners were among 844 who were either slated for release, had their terms reduced or had sentences commuted. The country’s justice ministry sent a detailed breakdown of the numbers without identifying any of the cases, which was reported by Morocco’s official news agency MAP.

Other Moroccan outlets were quick to identify the first 11 Hirak prisoners held in Casablanca since their sentencing in June, after their pardon was confirmed by Moroccan MP Hanane Rihhab. Lawyers for the 11 said they expected an immediate release.

The scores of other Hirak prisoners were spread across facilities in the Rif towns of Nador, Taounate and Al Hoceima, where they were originally tried after widespread and occasionally violent protests.

Al Hoceima has been at the center of Morocco’s unrest since the October 2016 of Mouhcine Fikri, the fish market vendor who was crushed to death in a trash truck while trying to salvage his wares after police threw out his market goods.

The ‘hirak’ movement rose in response to his death, and the political, social and economic frustrations that attached to it in a region that’s often felt distanced by Moroccan leaders. The movement gained momentum following the May 2017 arrest of popular activist Nasser Zafzafi, who was taken into custody after interrupting Friday prayers at an Al Hoceima mosque to press for political change.