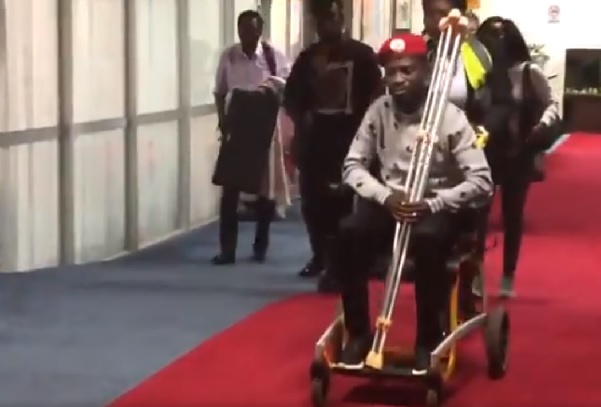 Ugandan musician Bobi Wine – an opposition MP whose real name is Robert Kyagulanyi – has finally left the country for medical treatment after being detained at the airport and prevented from leaving earlier Friday.

Human rights attorney Nicholas Opiyo said he witnessed Wine board a KLM flight at Entebbe Airport about midnight. “I just saw him off,” Opiyo said, adding that he’ll be working to get care for a second MP, Francis Zaake, who sustained serious injuries after political violence broke out in Arua on August 13.

Ugandan authorities originally said Wine and Zaake did not have permission to travel. Police spokesman Emilian Kayima told local media that they were cleared for travel by a team of nine doctors who approved the trip. Wine’s family members said he was en route to the United States, although the KLM flight first heads to Amsterdam.

Wine was injured and charged with treason after marchers in Arua supporting independent candidate Kassiano Wadri sparred during clashes that Ugandan security forces broke up with live fire. Wadri ultimately won that local election, but also was charged along with Wine and nearly three dozen others.

The arrests stem from the fact that President Yoweri Museveni also was in Arua that night to campaign for a different candidate when, according to authorities, his car came under attack by a stone-throwing mob.

Wine’s driver, Yasin Kawuma, was shot and killed during the violence.

The case has drawn international attention to Museveni and increased political repression in Uganda, including allegations that the seriously injured Wine was tortured. The popular musician was on crutches during a court appearance last week and was taken to the airport in a wheelchair, but Ugandan authorities deny any abuses while he was in custody.

Wine’s case also has sparked daily protests in Uganda, including Friday incidents in a Kampala suburb. Security forces have been deployed across Kampala.