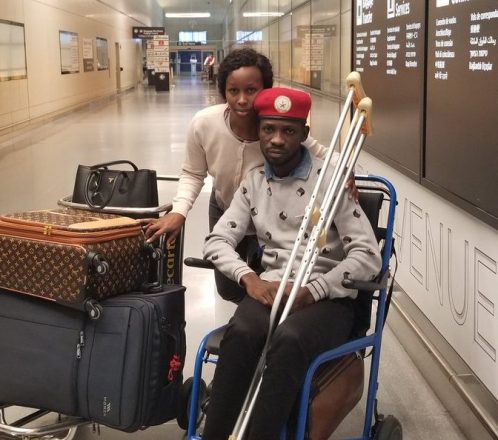 Ugandan musician Bobi Wine – an opposition MP whose real name is Robert Kyagulanyi – is now in the United States after leaving from Entebbe Airport about midnight Friday.

“Safely arrived in the U.S. where I’ll be receiving specialized treatment following the brutal torture at the hands of SFC soldiers,” Wine said in a social media post shortly after 2 p.m. local time “We thank the world for standing with us. I will soon tell you what exactly happened to me since 13th August and what is next.”

Wine finally left Uganda after being detained at the airport and prevented from leaving earlier Friday. Human rights attorney Nicholas Opiyo said he witnessed Wine board a KLM flight at Entebbe Airport about midnight.

“I just saw him off,” Opiyo said, adding that he’ll be working to get care for a second MP, Francis Zaake, who sustained serious injuries after political violence broke out in Arua on August 13.

Ugandan authorities originally said Wine and Zaake did not have permission to travel. Police spokesman Emilian Kayima told local media that they were cleared for travel by a team of nine doctors who approved the trip. Wine’s family members said he was en route to the U.S., although the KLM flight first headed to Amsterdam.

Wine was injured and charged with treason after marchers in Arua supporting independent candidate Kassiano Wadri sparred during clashes broken up by live fire from Ugandan security forces. Wadri ultimately won that local election, but also was charged along with Wine and nearly three dozen others.

The arrests stem from the fact that President Yoweri Museveni also was in Arua that night to campaign for a different candidate when, according to authorities, his car came under attack by a stone-throwing mob.

Wine’s driver, Yasin Kawuma, was shot and killed during the violence.

Spotlight on Uganda and human rights

The case has drawn international attention to Museveni and increased political repression in Uganda, including the allegations that the seriously injured Wine was tortured. The popular musician was on crutches during a court appearance last week and was taken to the airport in a wheelchair, but Ugandan authorities deny any abuses while he was in custody.

Perhaps prematurely, a Human Rights Watch report on June 26 welcomed a commitment from Uganda’s new police leadership to end torture, noting there were more than 1,000 complaints of police-involved torture filed with Uganda’s Human Rights Commission between 2012 and 2016. Uganda is one of only 10 African nations with specific anti-torture laws on the books, and the government has promised an inquiry into the recent allegations of torture.

Wine’s case also has sparked daily protests in Uganda, including Friday incidents in a Kampala suburb. Security forces have been deployed across Kampala as frustrated Ugandans demanded his release. The protests have continued for weeks, including an August 23 incident that left at least one person dead. Protesters near the courthouse in Gulu, where Wine appeared Monday, were dispersed with teargas.

The attacks on journalists also continue, with NBS-TV videojournalist Joshua Mujungu hospitalized after he was beaten while covering protests in the Kamwokya district of Kampala on Friday. “They then ordered him to delete all the footage he had recorded,” his employer said.  According to the Human Rights Network for Journalists (HRNJ) Uganda, the recent attacks on Mujungu, James Akena of Reuters and others demonstrate a spike in what is already an alarming pattern of media repression.

“The media operating environment is increasingly getting unduly restricted by both the State and non-state agents,” HRNJ Uganda said in a statement immediately following the Arua incident. “The attacks and threats which range from assault, denial of access to news scenes, damage of gadgets, unlawful arrest and detention are compounded by actions of abductions and incommunicado detention.”

Last week, HRNJ said Ugandan journalists are getting death threats. They’ve also been targeted in social media messages that accuse 19 of them by name of trying to overthrow the Museveni government.

There are also reports of numerous arrests of Wine supporters and opposition leaders; the chronically detained Kizza Besigye of the Forum for Democratic Change also was arrested last week, although some reports note that the longtime Museveni rival finds the newly-arrived political Wine a threat too.

Wine has been the target of death threats before, including episodes with grenades thrown at his Magere home last year, in a nation where suspected assassinations are not uncommon. Wadri’s own candidacy – and the reason for Wine’s fateful campaign appearance to support him in Arua  –  followed the assassination of former MP Ibrahim Abiriga on June 8. Abiriga was a stalwart supporter of Museveni and the ruling National Resistance Movement Party, and led the charge on Uganda’s 2017 presidential age limit debate.

Wine, on the other hand, was an outspoken leader against Museveni as the debate in parliament became contentious enough at one point to shut down the assembly. As heavily armed troops patrolled Kampala, raided NGO offices and fired teargas at protesting Makerere University students, Wine was at the center of controversy after he said he refused a bribe to ensure the aging Museveni could run again.

Most Ugandans said they wanted to keep an age limit that would mean the 74-year-old Museveni could continue on, but it was a debate that Museveni, now in office more than 30 years, won.