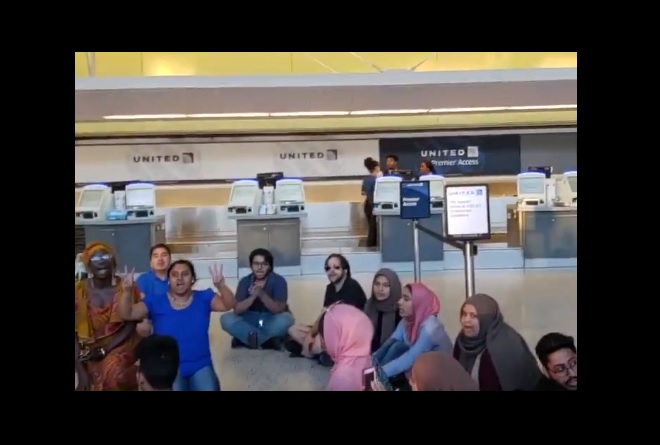 Most of the conversation about African migration focuses on sub-Saharan Africa, human trafficking to and across the Mediterranean Sea, and Europeans who are unwilling to receive migrants. In the United States, where President Donald Trump’s administration takes an increasingly alarming stance on immigration, it’s also the Global South that’s seen as a threat – but that means Honduras, Guatemala and Mexico.

Not always. Apart from the rancor caused by Trump comments about Africans, and amid the horrific tales of lost and detained child migrants in the U.S., there’s a lot less visibility into what happens with African migrants and the dangers they face. Three new stories from the U.S. demonstrate the impact on African immigrants – many of them traveling through Central America to the U.S. border – who are now caught up in Trump’s zero-tolerance America.

One comes this week from investigative journalists at Pro Publica, working with Mother Jones on how Trump’s “zero tolerance” policies affect immigrant children. Among them is a 17-year-old from Guinea who was detained for nine months and went on a hunger strike until they found him a home.

“As caseworkers try to find placements, the older teens live in fear of turning 18,” the ProPublica team, working in Chicago and surrounding Illinois, explained. “Records show that immigration officials, almost without fail, arrive on the children’s birthdays to take them into custody.” That’s also what happened to a young man from Ghana in July, after ICE determined he was older than originally determined.

Their stories put faces to the usual themes that come up when talking about the U.S. crackdown on African migration as policy decisions. One example is the order earlier this year to end Temporary Protected Status and Deferred Enforced Departure policies for Liberians, who have been welcomed by the United States since the 1991 civil war.

Others include the U.S. Supreme Court decision in June to uphold Trump’s travel ban for Libya and Somalia, the proposal to end to the Africa-friendly diversity visa program, and the uncertain future of immigrants who arrived in the U.S. as children under the Deferred Action for Childhood Arrivals (DACA) program. The administration ended the DACA program on Sept. 5, 2017, but it continues to face court challenges a year later.

Protesting deportations to Africa in Detroit

Amid the crackdown comes another story from Detroit, where the much older Banny Doumbia lives after coming to the U.S. from Côte d’Ivoire through New York City some 30 years ago. He served as president of a group for Ivorians living in Michigan, as a mosque leader and as vice president of United African Community Organization, a group founded in 2001 in Detroit. He also was convicted of financial crimes in the late 1990s.

Last month, the undocumented Doumbia – a father of four who runs a taxi business – checked in with immigration officials as required since 2004. This time the U.S. Immigration and Customs Enforcement office in Detroit kept him. They say he’s a convicted felon with theft and bank fraud cases dating back those 20 years, and that he’s avoided deportation in the past because ICE lacked travel documents. It’s a common theme to hear that ICE has them now, given intensified U.S. efforts to get repatriation cooperation from countries of origin.

“He is currently subject to an administrative removal order,” confirmed ICE spokesman Khaalid Walls. Doumbia remains in jail, but he would have been deported this week if officials had their way.

The U.S. immigration authorities tried to board Doumbia on a United flight Wednesday, but dozens of protesters showed up at the airport and Doumbia’s trip was canceled. Those protesters included Palestinian American Rashida Tlaib, who – along with Somali American Ilhan Omar in Minnesota – is likely to become one of the two first Muslim women to ever serve in the U.S. House of Representatives.

“You need to stop separation of families,” said Tlaib, who has been outspoken against Trump’s “Muslim ban” legislation and the forcible separation of migrant children and families in the U.S. Tlaib was joined by local activists from Michigan United and the American-Arab Anti-Discrimination Committee, as well as Deborah Alemu, an Ethiopian-American and national leader of African-focused UndocuBlack Network.

Alemu told the Detroit Free Press that her group “is concerned that this punitive detention for an Ivorian community leader, who is neither a flight risk or a security threat, gives ICE an unmitigated power to detain and deport leaders of the Ivorian community in Michigan.” Those concerns extend to other West Africans, and advocacy groups say they’re seeing a rise in such deportations from the Midwest.

Mauritanians at risk in Ohio

The cases include a Moroccan woman whose disabled child is a U.S. citizen, and alarming new removals of Mauritanians. One high-profile case involved cancer patient Seyni Diagne, who had lived in the U.S. for 15 years. Julie Nemecek, an Ohio attorney representing many of the dozens of Africans picked up, says ICE is systematically detaining Mauritanians and “essentially deporting them into slave trade.”

“This is a death sentence for them,” she added. Their cases also have come to the attention of Franklin Foer, whose September piece in The Atlantic, “How Trump radicalized ICE,” looks at the Mauritanian immigrant cases in Ohio to understand how U.S. policies that once took a relaxed approach to immigrants with long histories in the U.S. – with families, businesses, community service and college degrees – morphed into today’s cruel stance. They used to check in once a year and continue on with their lives. Now, they are told it’s not a matter of if but when until they are deported.

“In 21st-century America, it is difficult to conjure the possibility of the federal government taking an eraser to the map and scrubbing away an entire ethnic group,” Foer explains. Some have described it as ethnic cleansing, he adds, and questions if that’s really an overstatement. It’s especially troubling for acutely vulnerable Mauritanians, but it’s happening to West Africans across the American Midwest.

The case of Francis Anwana, a hearing impaired Nigerian who was 13 when he came to Michigan on a student visa 35 years ago, was postponed on Friday. Yet for many West Africans, it’s only a matter of time.