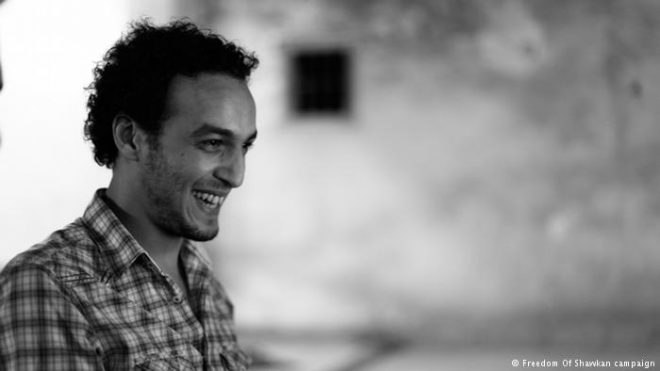 Egyptian photojournalist Mahmoud Abu Zeid, known as “Shawkan,” was sentenced to five years in prison on Saturday – five years that he has already spent behind bars after he was arrested while covering a demonstration at Rabaa Al-Adawiya Square in Cairo on August 14, 2013.

Shawkan was convicted of murder and belonging to a terrorist organization. He will be released from prison in a few days, according to a Committee to Protect Journalists account quoting his lawyer. Yet he will be required to appear at a police station every day at sundown to “check in” for the next five years.

“We are relieved that Shawkan, whose only ‘crime’ was taking pictures, can finally walk out of prison, but he will not be fully free,” said Sherif Mansour, CPJ’s Middle East and North Africa program coordinator. “His treatment, and that of scores of other journalists under Egypt’s totally discredited judicial system, is a stain on Egypt. The least the authorities can now do is to release him without any restrictions whatsoever on his right to live and work freely.”

Shawkan became a symbol of Egypt’s human rights movement after his arrest, and received the 2018 UNESCO-Guillermo Cano Press Freedom Prize during World Press Freedom Day in May.

He was one of 20 journalists imprisoned in Egypt, including Al Jazeera journalist Mahmoud Hussein, held since 2016 and accused of Muslim Brotherhood support and attempting to overthrow the government. Egyptian authorities renewed Hussein’s pretrial detention again earlier this week; he has now spent more than 620 days in detention and exceeded the time allowed under Egyptian law, Al Jazeera said.

Human rights groups accuse Egypt of using anti-terrorism laws to silence journalists. An April report from AFTE, an Egyptian free-speech advocacy NGO, details several cases. “Their safety and freedom are threatened all the time, and that threat is not only limited to those covering sensitive issues such as politics and parties,” the report said.