Home>News>Helene reaches hurricane status, pulls away from Cabo Verde
By AT editor - 9 September 2018 at 11:33 pm 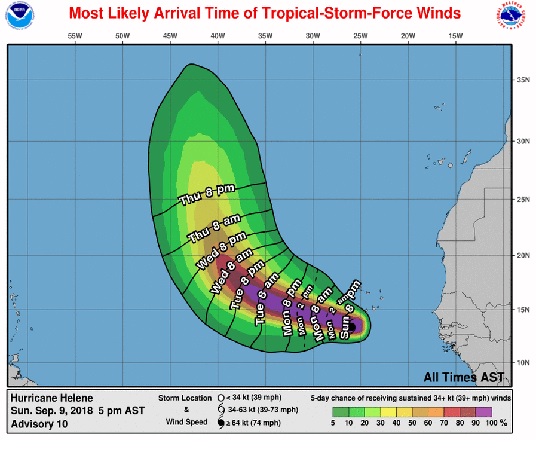 Weather forecasters say Tropical Storm Helene is now a hurricane, after forming off the coast of West Africa and strengthening as it approached the Cabo Verde islands.

The National Hurricane Center upgraded the storm to hurricane status Sunday at 8 p.m. local time in Praia, as Helene’s outer rain bands were affecting the southern islands. The storm poses no hurricane threat to Cabo Verde, and tropical storm warnings are discontinued for the islands of Santiago, Fogo, and Brava.

Hurricane Helene was located about 230 kilometers southwest of Cabo Verde with maximum sustained wind speeds of 120 kilometers per hour, and moving west at 20 kph before an expected curve to the northwest.

Hurricane-force winds extended up to 30 kilometers from the storm’s center, with tropical storm force winds reaching 130 kilometers from its core. Rainfall of 50-100mm is expected, with the possibility of 150mm in isolated locations of the southern leeward group of the islands.

Some rain may be welcome in Cabo Verde, where officials say the drought is the worst in 40 years with Brava among the hard-hit islands. Authorities reported the Poilão dam reservoir on Santiago dried up in June, although some rain reached Cabo Verde from a tropical depression in late August. Yet excessive rainfall heightens the risk of flash flooding and landslides, especially in mountainous terrain on the volcanic islands such as Fogo.

Helene follows in the footsteps of Fred, which in 2015 rapidly became a hurricane just off the coast of Senegal and, according to records dating to 1851, caused the first hurricane warnings ever issued in Cabo Verde. Fred formed as a tropical storm at 18.9W, according to U.S. meteorologists; Helene became a named storm at 18.5W.