Home>News>DRC's CENCO visits Lungu in Zambia to appeal for SADC election support
By AT editor - 11 September 2018 at 4:25 am 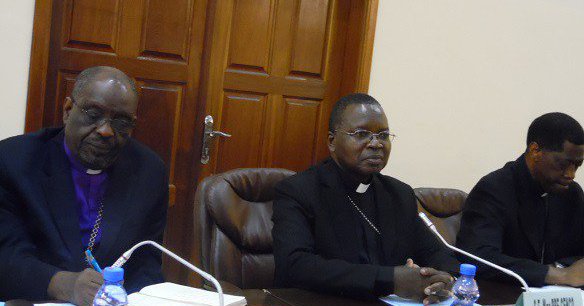 In Zambia, a delegation led by the influential leaders of the National Episcopal Conference of Congo (CENCO) met with President Edgar Lungu on Monday to discuss their concerns over the December elections.

The delegation asked Lungu, now the chairman of the Southern African Development Community (SADC), to ensure that the SADC will assist the Democratic Republic of Congo in holding peaceful and credible elections.

“You can help the Congolese people get out of this crisis and win the challenge of organizing a good, credible, transparent, inclusive and peaceful election,” said CENCO in a public statement on the visit.

“In the absence of credible, inclusive and peaceful elections, the Democratic Republic of Congo risks falling into violence or even chaos that can set the entire Great Lakes subregion on fire,” they warned.

The CENCO delegation praised some aspects of Kinshasa’s progress, including the nomination of Emmanuel Ramazani Shadary instead of President Joseph Kabila, who refused to hold 2016 elections as his two-term tenure expired. On the other hand, they presented a list of concerns over how the country’s electoral commission, CENI, was handling preparations.

Lungu told Roman Catholic Archbishop Fridolin Ambongo and his delegation that the SADC stands ready to assist them with the electoral process and bring peace to the DR Congo, according to Lusaka Times. Lungu said he has concerns that the exclusion of Jean-Pierre Bemba, Moise Katumbi and others casts a pall on the legitimacy of the process.

DR Congo is one of 16 SADC member states. The SADC opened an office in Kinshasa in April to establish a greater presence amid the nation’s political crisis, and previously said it will join with the African Union in supporting free and fair elections.