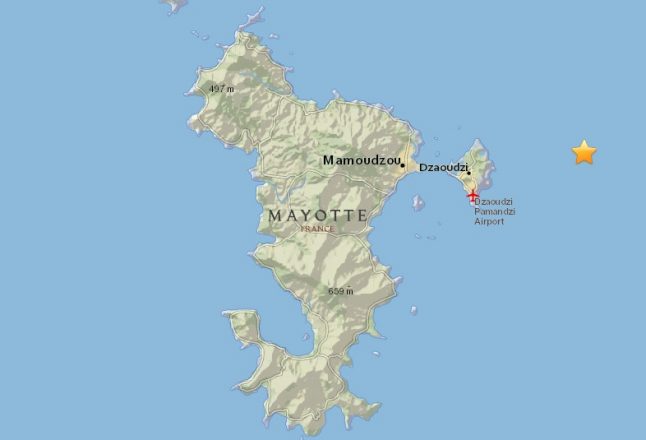 Residents of Mayotte were jolted from sleep early Wednesday by yet another earthquake  – this time, the strongest to affect the Indian Ocean island nation since July 5.

The United States Geological Survey reports the 4.7-magnitude quake came at 2:37 a.m. local time, some 10 kilometers from Pamandzi on the small eastern island of Mayotte. It is part of the Comoros group of islands but remains a French territory, located at the northern edge of the Mozambique Channel between the southern African mainland and Madagascar.

There were no immediate reports of injury or damage from the moderate quake, one of a series to affect the island in a seismic swarm that began on May 10. The strongest of them registered a 5.8-magnitude on May 15 and became the largest ever recorded in the archipelago, surpassing a 5.2-magnitude event in 1993.

France’s Bureau de Recherches Géologiques et Minières (BRGM), the geological agency for Mayotte, says the quakes are the result of a seismic hotspot as well as the island’s position along the East African rift, but there’s uncertainty about why the swarm has continued for more than four months.

Activity peaked in May and June, causing anxiety for the 250,000 island residents along with isolated damage. The quakes tapered off until late August saw an uptick in activity followed by this new ripple in September.

The heavily studied swarm has gone on so long that BRGM also announced that beginning Tuesday – ironically enough – the agency was returning to a 15-day reporting period for the Mayotte earthquakes unless conditions changed.