Home>Finance & Economics>Hundreds of Liberians march in 'Bring Our Money Back' protest
By AT editor - 25 September 2018 at 4:28 am 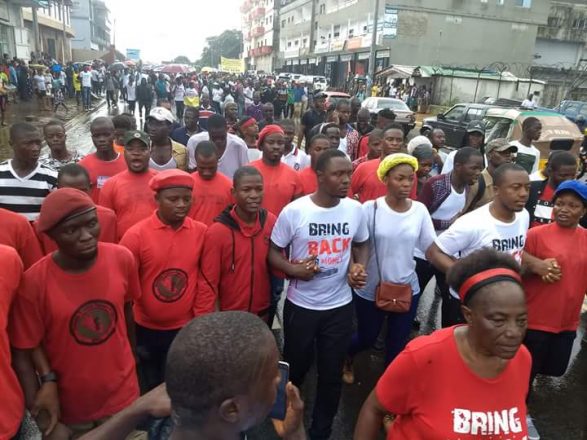 Hundreds of Liberians took to the streets of Monrovia on Monday, demanding accountability for the USD$103.4 million that officials say has disappeared from the country’s central bank.

Emmanuel Gonquoi, head of the Economic Freedom Fighters in Liberia (EFFL), and the COCUBOMB civil society organization (it stands for Concerned Citizens United to Bring Our Money Back) are demanding a full accounting.

They’re asking for the international community to help with an investigation, and gathered at the United States embassy site while also targeting the African Union, European Union, United Nations and the regional Economic Community of West African States, or ECOWAS.

“We demand the full restitution of (the missing money) and the prosecution of all those linked to this horrific corruption scandal that has injured our nation’s image,” said Martin Kollie, the young activist with Liberia’s Student Union Party who is spearheading COCUBOMB. The group also condemned the arrest of a young musician whose “Bring Our Container Back” song has rallied Liberians to the cause.

President George Weah also has faced protests in New York City as he attends the United Nations General Assembly. He has promised a full investigation as both he and former president Ellen Johnson Sirleaf have denied that their administrations are responsible for the loss.

Liberia has been investigating the missing shipment of millions – about 5 percent of Liberia’s 2017 national GDP – since August. The new bank notes were shipped through the port of Monrovia and Roberts International Airport, but there’s confusion over when they went missing or if in fact they are. Johnson Sirleaf said in a Friday interview that there’s a complete report that Weah’s government is withholding.