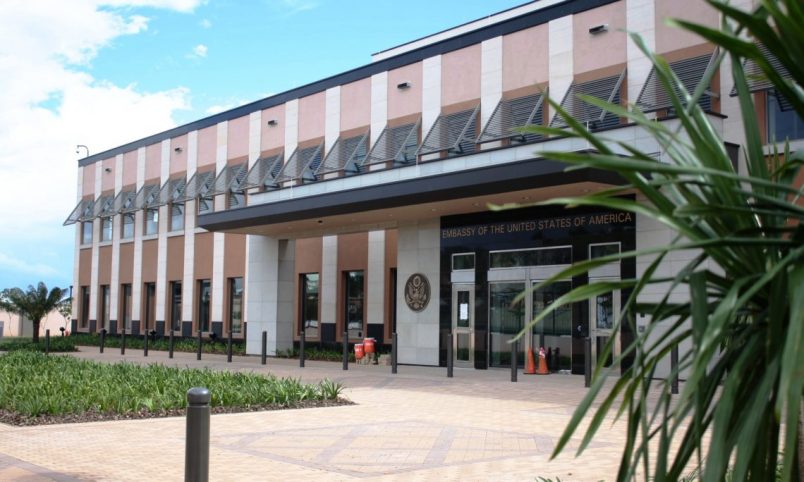 The United States Department of State has confirmed the weekend death of one of its diplomats in Madagascar, where a man was detained after he was caught scaling the fence of the diplomat’s home in Antananarivo.

“We are deeply saddened to confirm that a U.S. Foreign Service Officer was found dead in their residence in the overnight hours of Friday, September 21,” said department spokeswoman Heather Nauert.  “Our deepest sympathies go out to the family and the U.S. Embassy Antananarivo community.”

Nauert said U.S. investigators have opened an investigation along with Malagasy authorities. She did not identify the victim out of respect for the family and because of the ongoing investigation.

Local media in Madagascar also provided limited information about the attack, which they say happened about 1 a.m. Saturday in Ambohibao, north of the capital where a U.S. embassy office is located. Police headed to the male victim’s home as soon as they received an alarm alert, but the victim was already dead.

Local authorities said they’re also not releasing information that would hinder an investigation.

Madagascar recently has seen increased instability and some violent protests. The U.S. embassy elevated the level of caution for travelers on August 1 because of civil unrest and crime, and previously asked U.S. citizens to use increased caution in Antananarivo and other areas because of the ongoing political crisis. At least two protesters died in April when security forces opened fire.

The April 21 rally was one of a series of political developments this year in Madagascar, which has endured years of instability and stunted economic development. While there’s no reason to assume that the U.S. diplomat’s death was politically motivated – police obviously remain tight-lipped so far about what happened – it draws attention to the Indian Island nation and its 26 million people.

The current president is Rivo Rakotovao, who has served in an interim role since September 7 when President Hery Rajaonarimampianina stepped aside: The latter’s decision is required under Malagasy law for the incumbent because Rajaonarimampianina is running for president again as the HVM candidate.

Rakotovao, the former president of Madagascar’s Senate, has vowed to remain impartial in the upcoming elections and distance himself from HVM. Yet there’s much speculation about his influence in a country that has seen many of the same political candidates since a 2009 coup, when previous president Marc Ravalomanana was replaced after seven years.

Ravalomanana, leading the TIM party, has returned as a presidential candidate in 2018. Andry Rajoelina, the now-MAPAR leader who replaced him until 2014, also is standing for election. All told, there are 36 candidates, with 16 of them – all in alignment with Didier Ratsiraka, whose own stints as former military ruler or president spanned more than 20 years – asking that the November 7 election date be postponed.

Yet that’s a tricky decision too, because Madagascar’s constitution requires elections to be held in months outside of the rainy season. If there are delays, a second round might be pushed into 2019.

Whenever Madagascar holds its elections, it will be against the tense social and economic backdrop that prompted U.S. diplomats to issue warnings long before violence claimed one of their own. The country’s constitutional court overturned a Rajaonarimampianina decree earlier this year that some say would have prevented Ravalomanana and Rajoelina from running, because of restrictions on media access, campaign finance, and a prior conviction in absentia for Ravalomanana.

This controversy was the cause of the fatal April protest marches, which Rajaonarimampianina interpreted as another coup attempt.

The African Union, European Union, Southern Africa Development Community and United Nations all attempted mediation, while ultimately the court decision paved the way for a new unity government. It included both Rajoelina and Ravalomanana, as well as new Prime Minister and independent politician Christian Ntsay – all adding to the palace intrigue, and the layers and nuance in their relationships.

It’s not clear that any of this has added to the confidence of Malagasy voters, who continue to live under harsh economic realities. A World Bank report released on July 31 finds that 75 percent of the country lives in poverty using the USD$1.90 benchmark; that will only decrease by 2 percent in 2020, assuming growth projections currently at 5.4 percent for 2019.

The country’s agricultural sector provides some optimism, but it’s not taking off as hoped. The 80 percent of Madagascar’s population that relies on farming in some way still has limited access to technology, transportation and markets. The critical vanilla export crop is affected by drought and other climate impacts, while the recent Indian Ocean cyclones wiped out about 20 percent of rice for domestic consumption. Disease outbreaks, including plague, are among its health and education challenges.

Madagascar also has to protect its spectacular biodiversity and its tourism destinations, and that’s increasingly difficult with a spiking crime rate in cities like Antananarivo and vanilla-farm villages alike. Its people say they’re tired of corrupt ruling elites, which have historically led to a dearth of foreign investment, and opposition leaders demand change over unreliable power and water access, infrastructure and jobs. The U.S. is concerned, but so are the British and Canadians and the SADC. Above all, it’s Madagascar that’s desperate for change – and that’s a desperation that can’t be ignored without peril.