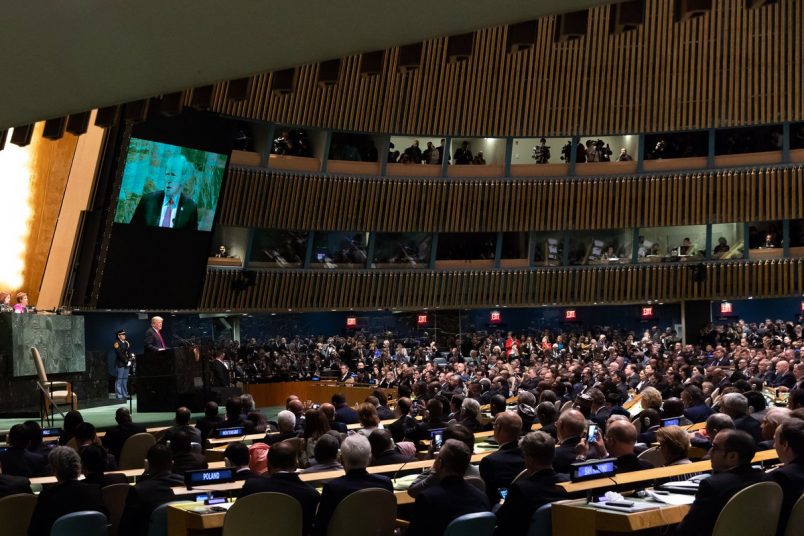 Trump’s speech drew laughter at the outset as he bragged about U.S. achievements under his administration – laughter the world was quick to note. Yet what seemed an erasure of the entire continent, with the exception of Egypt’s role in Middle East security, wasn’t really funny either.

“From Warsaw to Brussels, to Tokyo to Singapore, it has been my highest honor to represent the United States abroad,” Trump said. “I have forged close relationships and friendships and strong partnerships with the leaders of many nations in this room, and our approach has already yielded incredible change.”

He thanked North Korea’s Chairman Kim Jong Un and Asian leaders involved in denuclearization negotiations focused on the peninsula. He praised Jordan for accepting refugees fleeing the war in Syria. He threatened the “corrupt dictatorship” of Iran.

“Iran’s leaders sow chaos, death, and destruction,” Trump said. “Iran’s leaders plunder the nation’s resources to enrich themselves and to spread mayhem across the Middle East and far beyond.”

He underscored the U.S. rejection of the International Criminal Court, the UN Human Rights Council and the Global Compact on Migration. He praised record funding for the U.S. military, with USD$700 billion this year and $716 billion next year, and he affirmed $250 billion in trade tariffs imposed on China. He railed against socialism and globalism, and said U.S. energy security and its sovereignty are inseparable.

“The dreams that fill this hall today are as diverse as the people who have stood at this podium,” Trump said, praising India, Saudi Arabia, Israel and Poland.