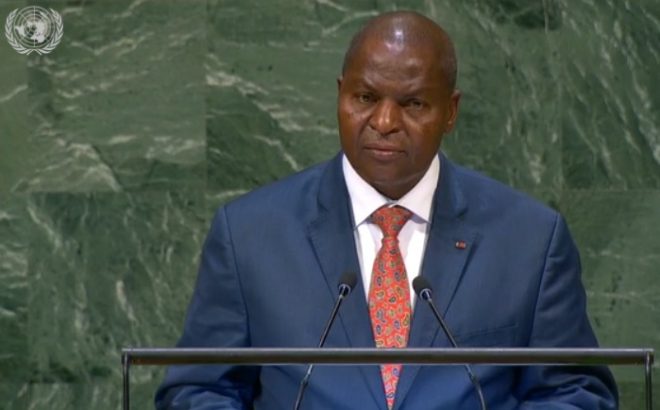 President Faustin Touadéra of the Central African Republic appealed for an end to an arms embargo on his conflict-torn country during a speech before the United Nations General Assembly in New York on Wednesday.

Touadéra praised MINUSCA – the UN mission for CAR – for its role in protecting civilians during the fighting between Muslim Séléka rebels and primarily Christian anti-Balaka militia. Those groups have evolved into at least 14 different armed factions and their respective alignments, with Touadéra seeking a national dialogue and other measures to end the violence.

“Our ambition is to contribute at MINUSCA’s side to the immense effort for the stabilization and return to peace in CAR,” Touadéra said. “But to fulfill this, allow me to reiterate from this lofty tribune our call for the total lifting of the arms embargo which still weighs heavily on our national army.”

Armed groups negotiating through the African Initiative for Peace and Reconciliation, led by the AU, have said they want military cooperation agreements with Russia and South Africa revised. The CAR-Russia security ties include arms sales under an exception to the embargo approved by the UN Security Council in December, and have come under scrutiny following the deaths of three Russian journalists on July 30. They were investigating the role of Russians, including mercenaries, in training CAR forces.

Attacks on CAR villages continue with frequent reports of mass fatalities, looted and burned villages, and some 608,000 people internally displaced as of June. It’s also among the world’s most dangerous locations for peacekeepers – one from Burundi was killed last month – and humanitarian aid workers. As of August, there were 205 incidents of attacks on aid workers reported so far this year.

Touadéra also reiterated his support for the UN climate agreement and Global Compact on Migration during his speech. His complete remarks are available in French here.