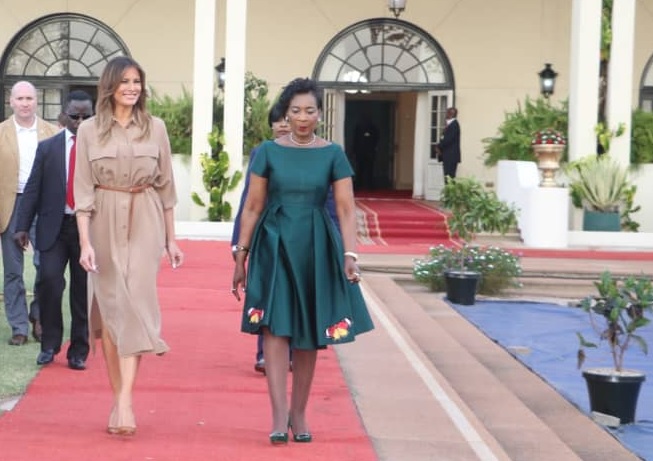 First Lady Melania Trump of the United States continued a four-nation tour of Africa with a visit to Malawi on Thursday, where she was greeted by Gertrude Mutharika, wife of Malawi’s President Peter Mutharika, at the airport in Lilongwe.

Trump, married to controversial U.S. President Donald Trump, is making her first visit to the continent. She began her tour in Ghana, and also will travel to Egypt and Kenya during the course of the week while promoting both her own BE BEST mission and that of USAID.

The first ladies visited at the state house, where garden tours and a traditional dance performance were planned, before heading to a primary school in Lilongwe supported with USAID funding.

“What an amazing experience,” said Trump after her visit. “Meeting those children and understanding their different way of life is why I wanted to travel here.”

The first lady’s tour with USAID is meant to help promote initiatives for children’s education, and maternal and child health. While warmly greeted in Malawi, however, she also encountered protesters on her travel route with #MeToo movement signs and at least one referring to how President Trump speaks about Africa and Africans.

Melania Trump’s BE BEST initiative is designed to encourage children to choose their best individual paths, and was a theme of songs and games at the Lilongwe school. Her program emphasizes social, emotional and physical health, and Trump has said she is excited about taking the campaign to the international level.