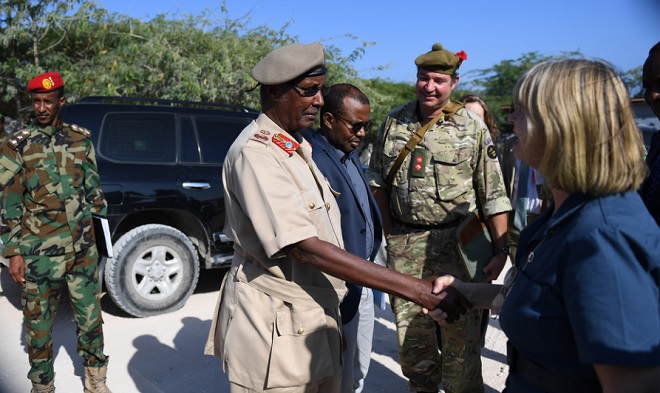 Harriett Baldwin, the British Foreign Office development minister for Africa, has completed a tour of East African nations to announce development and humanitarian aid from the United Kingdom.

Baldwin made stops in Uganda, Ethiopia and Somalia, including a visit with President Muse Bihi in Somaliland to pledge UK support for economic development and long-term reform.

While in Mogadishu, she met with Prime Minister Hassan Ali Khaire to discuss political and economic progress and advance the commitments made by British Prime Minister Theresa May in September. May promised USD$9.2 million in support for AMISOM as part of a package that also boosted humanitarian and Somali government aid.

“As you know, the UK has been consistent in saying that in terms of transition to both the Somali National Army and the Somali Police, that this needs to be done on a condition basis rather than on an artificial timetable,” Baldwin said.

In Uganda, she met with President Museveni and other officials with an emphasis on health. She announced $6.7 million in funding for Ebola preparedness work and toured the Medical Research Council/Uganda Virus Research Institute (URVI) and the London School of Hygiene and Tropical Medicine Research Unit.

Baldwin also announced up to $276.3 million in aid to help Uganda support refugees who have fled from conflicts in neighboring South Sudan and Democratic Republic of Congo.

The British MP also visited Ethiopia to focus on education, including a funding commitment for teachers and schools to ensure more than a million students, half of them girls, will complete 12 years of school.