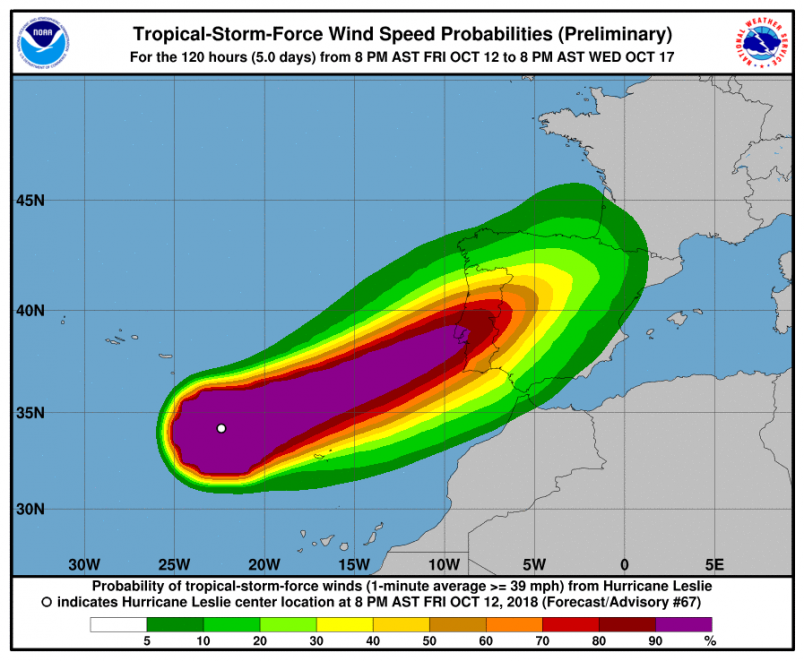 It finally happened early Friday morning. After wandering in the Atlantic Ocean for nearly three weeks, and frustrating meteorologists for about as long, the tropical cyclone Leslie moved far enough east to warrant a tropical storm warning for Madeira Island.

Madeira, an autonomous territory of Portugal, is some 700 kilometers west of Morocco. The government of Portugal upgraded the previous tropical storm watch to a warning. The latest updates also put Portugal and Spain in the path of the storm. Information from Portugal’s IPMA is at this link. Spain’s AEMET is available here.

It’s rare that the National Hurricane Center (NHC) in the United States finds Madeira on its tropical radar but Leslie has been something of a rare storm.

“It is the first known tropical storm warning for that place, and there are no known tropical storms in the historical record anywhere within 100 miles (160 kilometers) of that island,” wrote hurricane specialist Eric Blake in the NHC’s 11 p.m. EDT advisory (4 a.m. local time Friday in Madeira and Morocco).

The storm is currently a weakening hurricane with 120-kilometer winds, and tropical storm force winds extend 335 kilometers from its center. It is expected to transition into a non-tropical system but still bring hurricane-force winds into the Iberian Peninsula.

While the storm did not threaten the North African coast, it’s odd enough to see it nearby. Morocco, along with Portugal, Spain, and the Azore and Canary islands, all were likely to see dangerous surf conditions.