Home>News>Migration agencies warn EU over 'toxic' discourse ahead of Brussels summit
By AT editor - 17 October 2018 at 8:45 pm 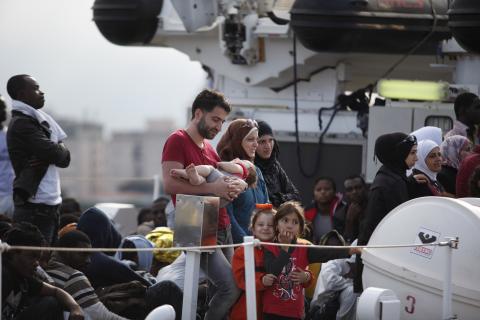 More than 1,700 people have died this year on the Mediterranean Sea migration route to Europe, and both UNHCR, the UN Refugee Agency, and IOM, the UN Migration Agency, appealed jointly to European governments on Wednesday to change their “dangerously toxic” discourse on migration.

“The current tenor of the political debate – painting a picture of Europe under siege – is not only unhelpful but completely out of touch with reality,” said UN High Commissioner for Refugees Filippo Grandi. “Arrival numbers are falling but the rate at which people are losing their lives is on the rise. We cannot forget that we are talking about human lives. Debate is welcome – scapegoating refugees and migrants for political gain is not.”

The appeal comes as European leaders began a two-day summit in Brussels, where migration is an agenda priority.

“Our aim is to send a strong message about fighting smuggling networks, protecting our external borders and building our cooperation with countries of origin and transit,” said European Council President Donald Tusk.

Yet immigration NGOs and advocates say many of the European policies, including the return of migrants to Libya rather than accepting them in Italy and other southern European countries, are failing.

In September alone, one person died or went missing for every eight people who crossed to Europe on the Central Mediterranean, in large part due to reduced search and rescue capacity, the agencies said.

“Perilous irregular migration is in no one’s interest. Together we must invest more in regular migration, enhanced mobility and integration to foster growth and development that benefits both sides of the Mediterranean,” said IOM Director General Antonio Vitorino.