Home>News>Crackdown in Cameroon ahead of Monday election announcement
By AT editor - 21 October 2018 at 11:17 pm 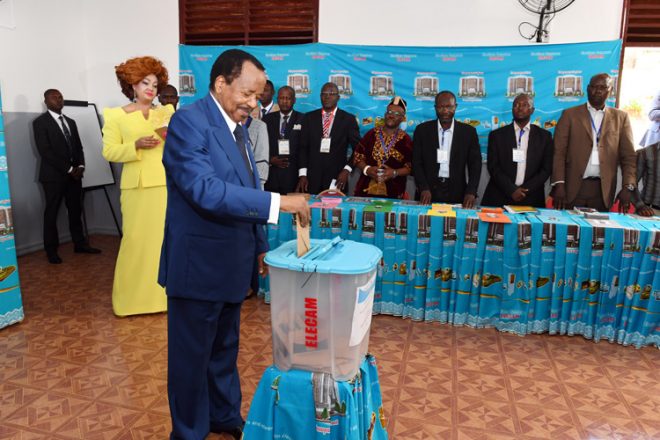 Tensions ran high in troubled Cameroon on Sunday as the national election commission, ELECAM, prepared to announce on Monday the final result of the October 7 presidential election.

ELECAM has 15 days from the poll closing to report final results according to Cameroon law, and the last of 18 legal challenges filed by opposition candidates was dismissed on Friday. Security forces were seen Sunday in Yaoundé and Douala, while clashes continued in the Anglophone communities of Buea and Bamenda.

All indications are that President Paul Biya, who has been in power since 1982, is likely to secure another seven-year term. Leaked results reported by local media outlets and shared on social media late last week suggest Biya is set for a decisive win with more than 70 percent of the vote.

That news led to more calls for protest in the West African nation that, for two years, has seen conflict escalate in its English-speaking territories, and evolve into an Anglophone secession movement amid widespread concern over security and human rights abuses.

The political activists organizing the Douala marches, Jean Michel Nintcheu and Edith Kah Walla, were prevented from leaving their homes Sunday, according to local media. At least three journalists were arrested in Douala before being released, while the Committee to Protect Journalists said three more remain imprisoned in Yaoundé and another in Bamenda.

Some citizens reported difficulty with Internet services. Cameroon drew international attention last year when the government cut off connectivity in its Anglophone regions for months.

“They said they wouldn’t cut or censor internet during election,” said prominent tech entrepreneur Rebecca Enonchong on Sunday. “They haven’t said anything about during announcement of election results. So please have your VPN installed and be prepared for limited or slowed connectivity.”

Activists began publicly pressing for reforms in October 2016, led by Cameroonian lawyers, teachers and doctors. They wanted to address the political, economic and social inequality of Anglophone communities, a cultural rift that dates to the colonial era. The peaceful rallies and protests spiraled into political violence, deaths, mass detentions and arrests, repression of journalists and other human rights issues.

The violence also disrupted the October 7 voting process in the northwest and southwest regions. ELECAM chief Essosse Erik has said he is confident in the legitimacy of the election, but human rights NGOs and others — including the United States government and British diplomats  — have expressed concern.