Home>Commentary>Cameroon's election: Resigned to Biya, or a new resolve for change
By Laureen Fagan - 22 October 2018 at 11:52 pm 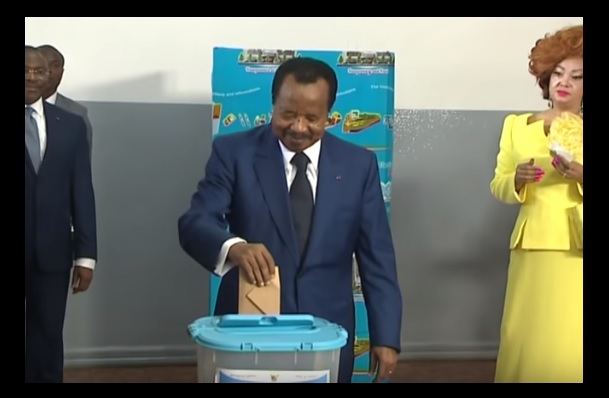 The re-election of President Paul Biya, now 85 years old and the leader of Cameroon since 1982, likely comes as a surprise to no one. Last week, the leaked results suggested Biya was set for a decisive win of the October 7 election with more than 70 percent of the vote.

On Monday, the country’s national election commission, ELECAM, confirmed that Biya received 71.3 percent of the vote and will now begin another seven-year term. In the final analysis, Biya’s re-election was such a foregone conclusion that Teodoro Obiang Nguema – the 79-year-old president of Equatorial Guinea who has ruled longer than anyone on the African continent – congratulated him over the weekend, before the commission made their public announcement.

At least the United States waited for results from ELECAM, which had 15 days from the time of the election to announce the final tally and insists the results are credible. During that time, Cameroon’s constitutional court dismissed 18 legal challenges filed by opposition candidates including Maurice Kamto, who promised to challenge the final results as well. Kamto took 14.2 percent of the vote, predictably amid claims of fraud and repression.

“The U.S. congratulates the people of Cameroon for largely peaceful elections on October 7,” said Department of State spokeswoman Heather Nauert.  “We urge all parties – including the government – to respect the rule of law, resolve peacefully any disputes through established legal channels and avoid hate speech.”

Perhaps equally predictable was Biya’s tone-deaf response to his West African nation, which has been torn by escalating conflict and crisis for the past two years. “Dear compatriots in Cameroon and the diaspora, thank you for your renewed and great confidence,” Biya said in a statement Monday evening.  “Let us now join in taking up, together, the challenges that confront us in ensuring a more united, stable and prosperous Cameroon.”

That’s easier said than done in Cameroon, especially in the northwest and southwest parts of the country where English-speaking minorities live and where, in some cases, voter turnout was unusually low in the five to 10 percent ranges.

Security forces were highly visible in Buea and Bamenda, while even in Douala – in the region where Kamto had his strongest showing – the government shut down opposition protests.

Kamto accused Biya’s regime of intimidating his Movement for the Rebirth of Cameroon (MRC) voters and publicly using hate speech to incite ethnic violence in a nation far too brittle to absorb the slurs. Kamto said the government was “orchestrating provocation” in order to blame it on the MRC coalition. The party’s treasurer, Thierry Okala Ebode, was arrested, while MRC representatives were forced by the military from polling stations in “most of the three northern regions” as well as parts of other regions.

The U.S. acknowledged irregularities but essentially dismissed them. “These irregularities may not have affected the outcome but created an impression that the election was not credible or genuinely free and fair,” Nauert said. She praised the African Union Election Observation Mission, quoting their observation that Cameroon’s “current framework needs to be strengthened in order to safeguard the democratic principles of separation of powers, fairness, and independence and impartiality.”

As Foreign Policy writers put it, Biya has given a “master class in fake democracy.” He’s long since consolidated his power with stacked courts at home and lobbyists abroad and nothing else matters.

What’s at stake in Cameroon

Biya’s win led to more calls for protest in a nation that, for two years, has seen conflict escalate in its English-speaking territories, and evolve into an Anglophone secession movement amid widespread concern over security and human rights abuses.

Activists began publicly pressing for reforms in October 2016, led by Cameroonian lawyers, teachers and doctors. They wanted to address the political, economic and social frustrations of Anglophone communities, tied to a cultural rift that dates to the colonial era in the primarily French-speaking nation.

The peaceful rallies and protests were met with a Biya crackdown and spiraled into political violence, deaths, mass detentions, repression of journalists and other human rights issues. It also led to the vision of Ambazonia, a secession movement advanced by armed separatists and conflicts that have sent thousands fleeing.

Other observers have been less generous than the U.S. in its assessment of Cameroon’s election, including the Global Centre for the Responsibility to Protect. “Given the current unrest in the Anglophone regions, it is difficult to see how free, fair and transparent elections will be able to take place,” warned the center, which focuses on the prevention of genocide and human rights atrocities.

Already, political activists organizing the Douala marches against Biya’s election, Jean Michel Nintcheu and Edith Kah Walla, were prevented from leaving their homes on Sunday. At least three journalists were arrested in Douala before being released, while the Committee to Protect Journalists said three more remain imprisoned in Yaoundé and another in Bamenda.

Some citizens reported difficulty with Internet services. Cameroon drew international attention last year when the government cut off connectivity in its Anglophone regions for months.

“They said they wouldn’t cut or censor internet during election,” said prominent tech entrepreneur Rebecca Enonchong on Sunday. “They haven’t said anything about during announcement of election results. So please have your VPN installed and be prepared for limited or slowed connectivity.”

What Cameroon and the rest of the world must now be prepared for is continued Biya rule, and the costly and violent divisions that come with it – and agree, at the least, that it’s time to end the bitter standoff over the Anglophone issue and work toward a new engagement.

It’s too late for yesterday and today may be too soon for that work, but tomorrow isn’t.