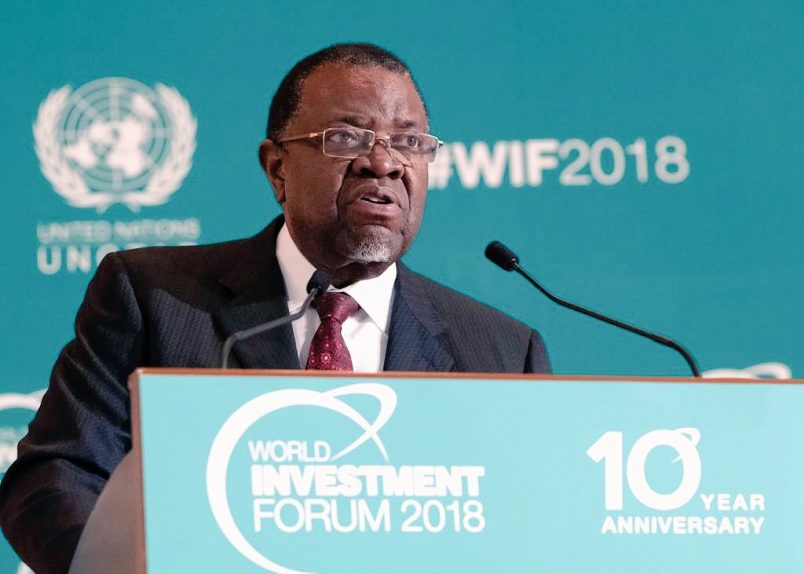 President Hage Geingob of Namibia made a case for continued investment in Africa during Tuesday’s World Investment Forum in Geneva, while defending the role of China in building and funding much-needed infrastructure.

Geingob was participating in the Global Leaders Investment Summit led by Mukhisa Kituyi, the secretary general of the United Nations Conference on Trade and Development (UNCTAD), as he delivered remarks on the backlash against globalization and its impact on African nations.

“Unilateralism is being promoted through protectionism, placing globalization and multilateralism under siege,” said Geingob. That’s leading to decline in foreign direct investment (FDI) that’s acutely felt on the African continent, and threatens the achievement of sustainable development goals in the face of climate change.

Citing this year’s World Investment Report, Geingob said global FDI fell from USD$1.8 trillion in 2016 to $1.4 trillion last year, a loss of 23 percent. The FDI flows to Africa are down 21 percent, with greenfield investments down 14 percent. Some countries, such as Morocco and Ethiopia, continue to attract investment but others are struggling, notably Angola and Mozambique.

China has stepped into that space, and sovereign African nations shouldn’t be judged for seeking Chinese funds, Geingob said. In September, China announced $60 billion for African development in security, trade, infrastructure and health care, at least $10 billion of it in investments by Chinese companies over the next three years.

Namibia has the perception of economic well-being, Geingob added, but the way the World Bank calculates its status as an upper-middle income nation fails to acknowledge how skewed its income distribution really is. That makes it harder for Namibia to secure more affordable funding, in a difficult time of global economic policy shifts.

“The time has come for us to decide. Do we abandon multilateralism and turn inward, abandoning decades of progress, or do we decide to hold hands and pull together for the benefit of humanity?” Geingob said.