Home>News>DRC opposition set for Kinshasa march against election fraud
By AT editor - 26 October 2018 at 12:25 am 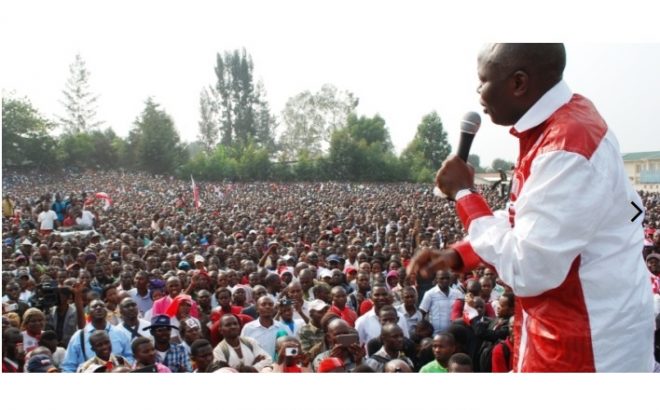 Opposition leaders in Democratic Republic of Congo plan to move forward with a Kinshasa march on Friday to demand free, fair and credible elections – an outcome they fear is threatened by the use of controversial voting machines and unreliable voter registrations.

Vital Kamerhe, the Union for the Congolese Nation (UNC) candidate, is appealing for people from all walks of life to show solidarity by taking part in the march. He is one of 20 candidates facing Emmanuel Ramazani Shadary, the People’s Party for Reconstruction and Democracy (PPRD) candidate chosen when the PPRD’s President Joseph Kabila agreed to step down and hold the long-delayed elections.

“The political opposition will fight relentlessly with the utmost energy to get rid of the voting machine, a machine that has no legal basis,” Kamerhe said. “The opposition will also fight to have the electoral file, which is peppered with ten million fictitious (voters), cleaned up.”

Kamerhe flew back for the march from a Johannesburg meeting that included representatives for Felix Tshisekedi of the Union for Democracy and Social Progress (UDPS), Moïse Katumbi’s “Together for Change” movement, Freddy Matungulu of Congo na Biso (CNB) and others still without consensus on a coalition candidate. The seven opposition leaders said Thursday that they will select one by November 15.

Though prevented from running, the exiled Katumbi appealed to Congolese to support the protests. Tshisekedi and the UDPS have distanced themselves from the Friday marches, which are planned in other cities as well. Yet they remain aligned over the machines and concerns about the voting rolls.

The opposition candidates issued a joint statement on their refusal to boycott the December 23 elections earlier this week. The UDPS has been particularly steadfast in its commitment to make sure that elections delayed since 2016, at the end of Kabila’s constitutionally determined term, aren’t further compromised. Kabila’s decision touched off a political crisis marked by violence and ongoing instability.