Home>News>China vows to make Africa a UN Security Council priority
By AT editor - 1 November 2018 at 5:43 am 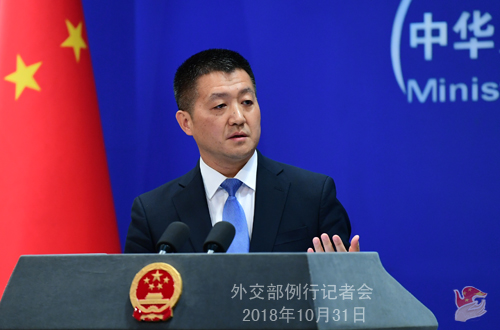 On Thursday, China takes over the rotating presidency of the United Nations Security Council for November and all indications are that African affairs will be a top priority.

Foreign ministry spokesman Lu Kang said that, according to available information, the situation in the Sahel is a priority topic for Security Council deliberations set this month. So is the security situation in Libya, as well as other countries including Syria and Iraq.

“China, as the rotating president, is also considering holding open sessions on strengthening multilateralism and the role of the United Nations against the background of the current situation and on the issue of peace and security in Africa,” Lu said during a Wednesday press briefing. “We are in consultations with other members of the Security Council on the working plan for November.”

He acknowledged the complex challenges to peace and security that currently confront the international community, and said China – as a permanent Security Council member – is well poised to lead on these issues.

“We will also step up interactions with non-Security Council members, in particular parties involved in the matters on the Security Council’s agenda,” Lu said.

China has stepped up its role in African peace and security in recent years, and now contributes a bit more than 10 percent toward the UN peacekeeping budget. That budget in 2018-2019 is USD$6.7 billion, with only the United States providing more support – and threatening routinely to decrease or eliminate it.

China’s presence was most evident in South Sudan, where peacekeeping forces were thanked this week for their instrumental role in the peace process. All told there were 2,506 Chinese participating in peacekeeping missions as of September 2018. They are present in the newly extended mandate of MINURSO in Western Sahara, in Mali’s dangerous MINUSMA mission, in the Democratic Republic of Congo and elsewhere.

Beijing maintains a military base in Djibouti, and has committed funding to support African security through its Forum on China-Africa Cooperation. A related China Africa Security Forum was held in June.