Home>Finance & Economics>India's VP visits Botswana expo, heads for Zimbabwe and Malawi
By AT editor - 2 November 2018 at 6:22 am 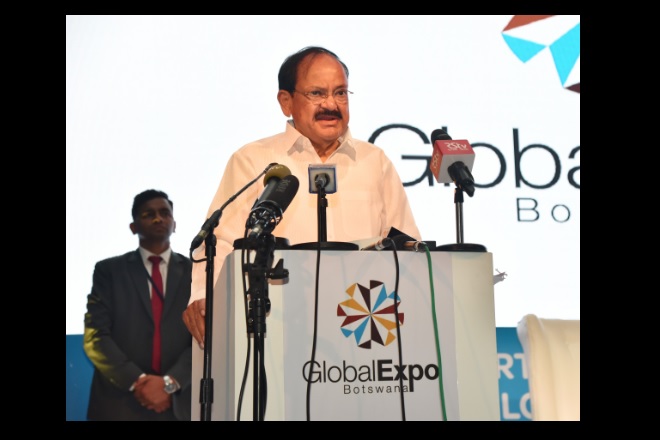 The United States isn’t the only nation with leaders making a high-profile visit to the African continent this week. Indian Prime Minister Narendra Modi also has made Africa a priority, stepping up his own visits on trade and cooperation, as well as those of President Ram Nath Kovind and Foreign Minister Sushma Swaraj.

This time it’s Indian Vice President M. Venkaiah Naidu’s turn. He’s wrapped up a visit to Gaborone to attend Global Expo Botswana before heading off to stops in Zimbabwe and Malawi.

“Botswana and India enjoy a longstanding and enduring partnership because we share the common values of democracy and strong people-to-people ties,” said Naidu, who delivered a keynote address at the business forum.  “I appreciate Botswana’s political and economic stability and its fastest growing economy status in the Southern African region.”

Naidu noted that 25 Indian businesses participated in the expo, the largest participation of any country represented. India and Botswana now have bilateral trade valued at USD$1.75 billion in 2017-2018, an increase of 26 percent for the year.

“India’s engagement with Africa over the last four years has been unprecedented,” Naidu added, noting  Modi’s establishment of 10 guiding principles to advance the relationship on issues including climate change and counterterrorism. During an India-Africa Forum in 2015, India pledged $10 billion in credit for Africa, as well as $600 million in grants and 50,000 scholarships.

India also plans 18 new embassies in Africa by 2021, growing its diplomatic presence in what will be a total of 47 African nations.