Home>News>Security Council briefing focuses on DRC militant-organized crime link
By AT editor - 8 November 2018 at 5:47 am 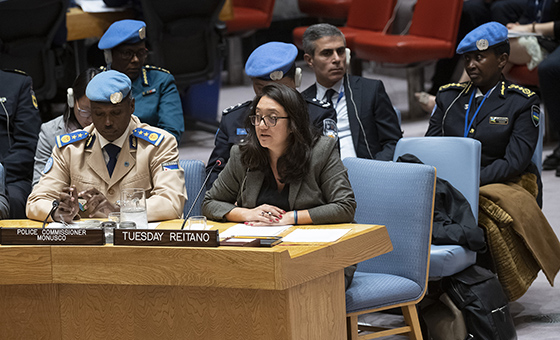 The Democratic Republic of Congo is among nations where authorities are working to reduce the impact of organized crime that is thriving among armed groups in conflict zones and financing international terrorism.

That’s according to experts who briefed the United Nations Security Council this week. They discussed progress and challenges in disrupting networks that have turned to exploiting natural resources and extraction industries – gold and oil among them.

The groups are moving beyond traditional activities such as drug and human trafficking, or holding hostages for ransom, said Tuesday Reitano, Deputy Director of the Global Initiative Against Transnational Organized Crime. But the money rarely goes to local actors.

“By far the larger share of the $31.5 billion goes to political actors at all levels, and associated transnational criminal networks,” she said. “These, therefore, are the main beneficiaries from instability, violence and lack of state capacity for enforcement, and who thus retain an interest in the perpetuation of conflict.”

Reitano’s remarks were part of an annual briefing by UN peacekeeping leaders.  Awale Abdounasir, the UN Police Commissioner for MONUSCO in the DR Congo, said his teams are working with government – particularly the Congolese national police – to curb organized crime activity among armed groups.