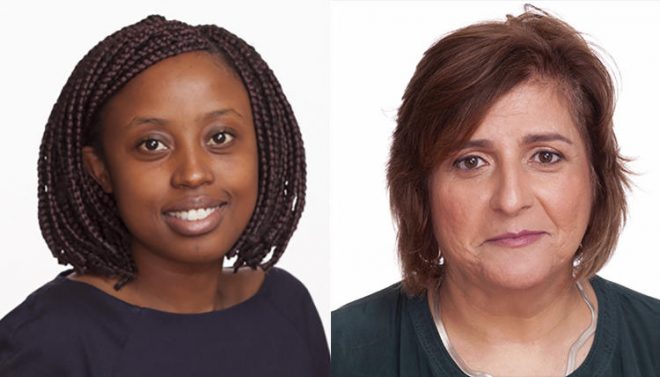 The Committee to Protect Journalists is calling on authorities in Tanzania to release two CPJ staffers they say were detained Wednesday night in Dar es Salaam.

Angela Quintal, the CPJ coordinator for Africa, right, and colleague Muthoki Mumo went missing from their hotel room after officers who said they were Tanzanian immigration officials arrived at their room.

The officials searched the pair’s belongings and would not return their passports when asked, the CPJ statement said, citing Quintal. Both Quintal and Mumo were then escorted from the hotel and have been taken to an unknown location. They were in the country on a reporting mission for CPJ.

“We are concerned for the safety of our colleagues Angela Quintal and Muthoki Mumo, who were detained while legally visiting Tanzania,” said Joel Simon, CPJ’s executive director. “We call on the authorities to immediately release them and return their passports.”

Tanzania’s crackdown on journalists under President John Magufuli has escalated since his 2015 election. Members of the media, as well as political opposition leaders, are commonly harassed and detained. Some have died, including CHADEMA party members Godfrey Luena and Daniel John in February. Others remain missing, such as journalist Azory Gwanda, who disappeared a year ago.

At least 65 organizations from across Africa signed a letter to Magufuli in May to express their concern over violent responses to press freedoms. They also urged the president to end the closure of media outlets and the imposition of new license fees, among other provisions of Tanzanian legislation.