Home>In Depth>On Khashoggi, Trump support for Saudis is met with anger and dismay
By AT editor - 21 November 2018 at 4:10 am 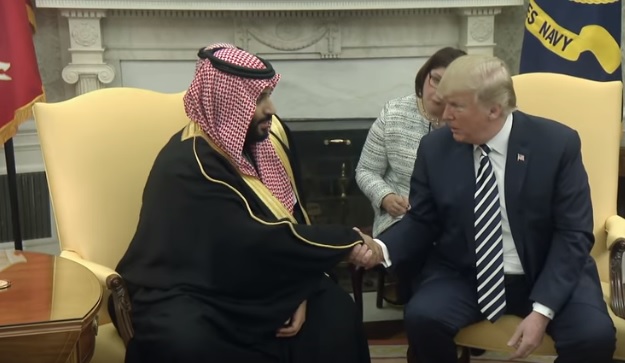 After weeks of investigation into the October 2 death of Saudi Arabian journalist Jamal Khashoggi in Turkey, the United States said Tuesday that it stands by its relationship with Riyadh – a move that critics say gives a green light to repressive, authoritarian governments in Africa and across the globe.

“We may never know all of the facts surrounding the murder of Mr. Jamal Khashoggi. In any case, our relationship is with the Kingdom of Saudi Arabia,” said the statement from President Donald Trump.

The distinction drew a clear line in the sand when it comes to holding Crown Prince Mohammad bin Salman (MBS) accountable for the death of the 60-year-old journalist, who was living in exile after the Saudis placed a ban on his writing in 2016. That came after Khashoggi criticized Trump himself, U.S. officials reported last year.

U.S. intelligence officials concluded last week that MBS ordered the death of Khashoggi, relying on evidence that includes communications traced between the prince, a senior aide and the killers. Yet they hesitated to make a final determination and passed the information to Trump aides and U.S. lawmakers.

The White House then made its announcement on Saudi Arabia. “They have been a great ally in our very important fight against Iran,” Trump said. “The United States intends to remain a steadfast partner of Saudi Arabia to ensure the interests of our country, Israel and all other partners in the region.”

The White House noted Saudi Arabia’s agreement to invest USD$450 billion in the U.S., with at least $110 billion destined for Boeing, Lockheed Martin, Raytheon and other U.S. defense contractors.

“After the United States, Saudi Arabia is the largest oil producing nation in the world,” Trump added. “They have worked closely with us and have been very responsive to my requests to keeping oil prices at reasonable levels – so important for the world.”

Trump emphasized the “America First” principle that is the foundation of his administration, making clear that he accepts from King Salman and MBS the repeated denials that they had anything to do with Khashoggi’s death. In terms of consequences, the U.S. Treasury imposed sanctions on 17 Saudi citizens last week after determining that they were involved in killing the journalist at their Istanbul consulate.

Consul General Mohammed Alotaibi, responsible for the Saudi consulate, was named to the list, as was senior Saudi official Saud Al-Qahtani. “These individuals who targeted and brutally killed a journalist who resided and worked in the United States must face consequences for their actions,” said Treasury Secretary Steven Mnuchin in announcing the U.S. sanctions.

“The Government of Saudi Arabia must take appropriate steps to end any targeting of political dissidents or journalists,” Mnuchin added. Yet it’s there that U.S. elected officials, journalists and observers, joined by many in the international community, say the U.S. decision on MBS is ominous.

Apart from close friends and family, perhaps nowhere is outrage over the White House decision on Khashoggi greater than at the Washington Post, where his writing was published. Karen Attiah, the Global Opinions editor with whom he worked, has been a tireless advocate for justice following his death.

“In effect, Trump is doing his best to help the Saudi regime get away with the murder of a U.S. resident and one of the Arab world’s most prominent writers. If the administration continues down this path, it will further destroy whatever is left of America’s moral credibility on global human rights and freedom of expression,” Attiah wrote in response. “It puts truth-seekers and journalists who dare challenge the Saudi regime and other intolerant governments in grave danger, no matter where they live.”

… and consequences beyond Riyadh

Overlooking the kingdom’s human rights violations and supporting its authoritarian leadership, in order to maintain stability or protect economic interest, is akin to the historical mistakes the U.S. has made in the past in the Middle East, Africa and elsewhere, she said. The Saudi prince appears to merely be next.

“Jamal’s death, while heinous and personally painful for his colleagues, family and friends, is just the latest alarming symptom of MBS’s political recklessness,” Attiah said. “In the past two years, under the crown prince’s rapid ascent to power, scores of peaceful reformers and human rights campaigners (including elderly women) have been jailed.”

Indeed, both Amnesty International and Human Rights Watch issued new reports on Tuesday describing the torture and harassment of Saudi Arabian activists detained since May at Dhahban Prison.

“Only a few weeks after the ruthless killing of Jamal Khashoggi, these shocking reports of torture, sexual harassment and other forms of ill-treatment, if verified, expose further outrageous human rights violations by the Saudi authorities,” said Lynn Maalouf, Amnesty International’s Middle East research director. She called on the international community to place pressure on Saudi Arabia under MBS.

Yet even as other leaders may do just that, Trump’s move on Tuesday signals that U.S. interests will come before any moral authority on human rights – and that makes it so much easier for authoritarian leaders in African nations, across Asia and in South America to violate them with impunity.

“While the world is seeking answers to the savage murder of Jamal Khashoggi, the fate of women and human rights activists in Saudi prisons continues to hang in the balance,” said Michael Page, deputy Middle East director at Human Rights Watch.

The kingdom’s human rights failures deserve withering international criticism and are unworthy of “unblinking” support in the West, he added. Unfortunately, that’s exactly what they got from Trump. “The world is a very dangerous place!” the U.S. president said in his statement, as if his decision on Khashoggi were likely to make it less so and, worse still, as if it didn’t really matter.