Top-ticket Congolese candidates Felix Tshisekedi, above, and Vital Kamerhe made a high-profile return to Kinshasa on Tuesday, with thousands of supporters crowding the streets in the rain to watch their motorcade come from the airport.

While the day was mostly peaceful, there were a few conflicts between police and the crowds, with rocks thrown and tear gas used, according to local media reports. Six police officers were injured and two vehicles destroyed about a mile from the airport as Tshisekedi and Kamerhe made their way into the city. 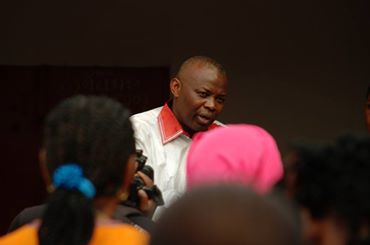 The incidents didn’t deter the opposition candidates, who said they had the power to win and promised credible elections. Tshisekedi praised Kamerhe, right, for putting the country before his own ambitions. He is part of a ticket that would see him become prime minister if Tshisekedi – son of the late opposition leader Étienne Tshisekedi and leader of the Union for Democracy and Social Progress (UDPS) party – wins the presidency. Kamerhe heads up the Union for the Congolese Nation (UNC) party.

“It’s the winning ticket,” said Kamerhe, promising to restore dignity and hope to the nation.

The opposition candidates announced they had joined forces under a new alliance agreement last week, leaving behind a deal they signed in mid-November to support Martin Fayulu of the Engagement for Citizenship and Development (ECiDé) party.

Fayulu is backed by a “Lamuka” coalition that includes Moïse Katumbi’s Together for Change movement and Jean-Pierre Bemba of the Movement for the Liberation of Congo (MLC) party, both of whom were barred from competing.

The opposition candidates face People’s Party for Reconstruction and Democracy (PPRD) candidate Emmanuel Ramazani Shadary, who replaces President Joseph Kabila. Kabila announced he would not run again in August, after postponing elections and refusing to step down from his constitutionally limited second term in 2016.