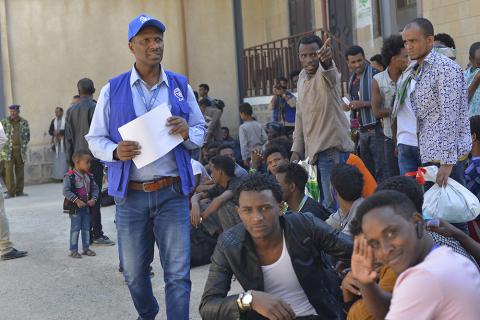 More than 400 Ethiopian migrants who have been stranded in Yemen are headed home, as the International Organization for Migration (IOM) begins flights to take them to Addis Ababa.

The first group of 102 Ethiopians landed in Addis Ababa on Monday, with another 316 arriving by Thursday through a Voluntary Humanitarian Return (VHR) program. About a quarter of them are minors, the agency said.

This is IOM’s first airlift since shortly after the conflict broke out in 2015 and the largest operation carried out by IOM in Yemen to date.

“The airlift, made possible through close cooperation with authorities in Yemen and Ethiopia, opens the way for improved humanitarian assistance for migrants in Yemen,” said Mohammed Abdiker, IOM’s Director of Operations and Emergencies.

The group joins more than 600 migrants who have returned to Ethiopia by ship on the Gulf of Aden so far this year.

Africans migrate to Yemen and the Gulf states in search of work, and continue to do so despite the travails of the four-year conflict in Yemen.

“A significant portion of the new arrivals are unaware of the severity of the situation in Yemen or the distance they will have to transit,” said David Derthick, the chief of mission for IOM in Yemen. “They have found themselves stranded in a conflict-stricken country without access to basic needs and subjected to multiple forms of abuse, exploitation and violence.”

IOM estimates that nearly 100,000 migrants reached Yemen in 2017, a number that will likely increase by 50 percent in 2018. A conference next week in Djibouti will look at how the Horn of Africa’s new shifts toward peace can support better outcomes for migrants in the region.