Home>News>Global Compact for Migration is adopted in Marrakech
By AT editor - 10 December 2018 at 10:41 pm 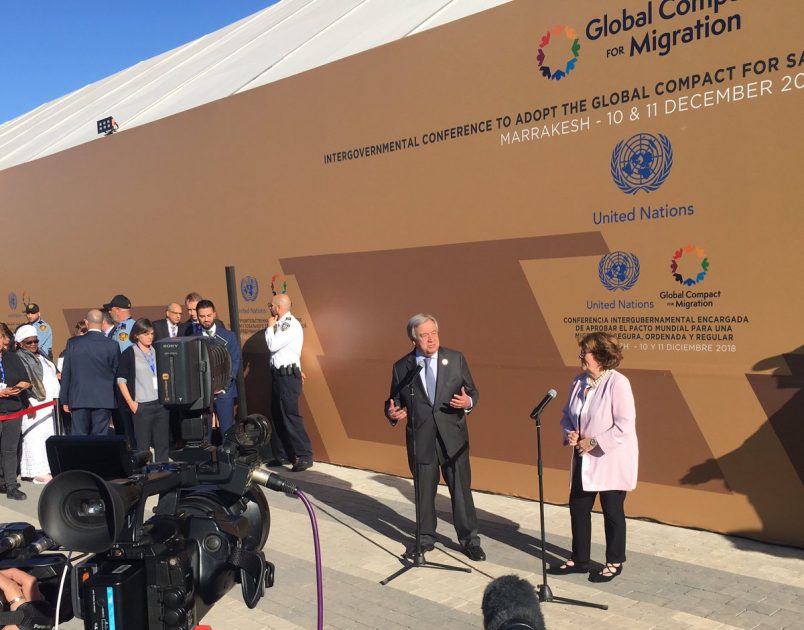 Global leaders meeting in Morocco have adopted the Global Compact for Migration, an international strategy to deal with migrant flows first introduced at the United Nations General Assembly two years ago.

The compact approved by 164 countries on Monday is meant to end the trauma of migrant experiences across Africa and the Mediterranean, in Asia, in Latin America and beyond. United Nations Secretary General António Guterres called it a “roadmap to prevent suffering and chaos.”

In a speech that marked the 70th anniversary of the Universal Declaration of Human Rights, Guterres affirmed the human dignity and rights of all migrants while opting to dispel myths about the compact in his address.

They included issues that have been at the heart of objections from the United States, Hungary, Italy and others who have rejected the compact or postponed its approval.

The UN compact is not a formal treaty, is legally non-binding and does not infringe on sovereignty, he said. “It is a framework for international cooperation, rooted in an intergovernmental process of negotiation in good faith,” Guterres told the delegates in Marrakech.

Nor does the pact give migrants the right to enter a specific destination country. It is meant to alleviate the high number of deaths and human rights abuses in nations like Libya and other transit routes.

The Moroccan minister of foreign affairs, Nasser Bourita, announced the unanimous adoption of the compact, while German Chancellor Angela Merkel welcomed it as evidence of a “more realistic understanding over global migration.”

Merkel warned nations against going it alone, and urged a multilateral approach that promotes legal migration while protecting borders and preventing human trafficking.

A final draft of the Global Compact for Migration is available at this link.