Home>News>French police search for Strasbourg attack suspect
By AT editor - 12 December 2018 at 9:56 pm 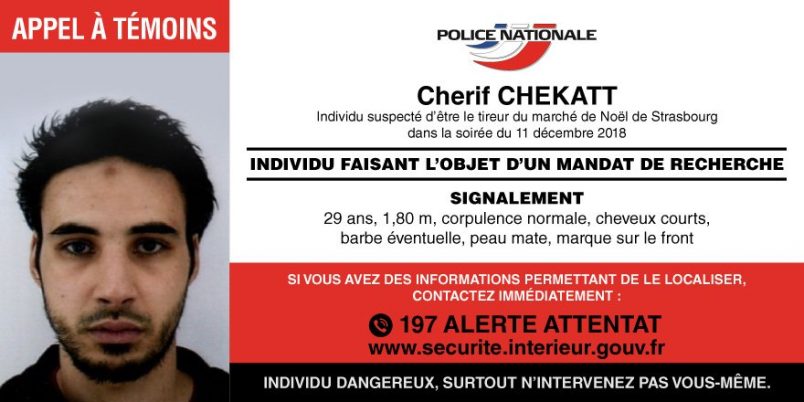 Police in France are still searching for the suspect in Tuesday’s attack on a Christmas market in the city of Strasbourg.

The suspect is identified as Cherif Chekatt, a 29-year-old French national of Moroccan descent, who they say opened fire on the market after escaping arrest during a roundup earlier in the day. Three people were killed and another 13 wounded, at least several of them critically, in what French authorities say is a terror attack. The suspect also used a knife during the attack.

Chekatt is known to French authorities and listed on a terror watch list, with a lengthy list of more than two dozen convictions in France, Germany and Switzerland, according to France’s BFM television. The previous arrests are for gang-related offenses such as theft and drug dealing; in some cases, such offenders become radicalized and move into Islamic extremist terror groups and operations.

French authorities issued an appeal Wednesday evening seeking help from witnesses and the public in capturing Chekatt. Hundreds of police have descended on Strasbourg to assist with the search for the suspect, who they believe was wounded in a shootout with soldiers at the Christmas market before fleeing. They warned Chekatt is armed and dangerous, and asked people not to report observed operations or other information that might compromise their work on social media.

The Strasbourg market attack is the most recent terror incident in France since May, when a knife-wielding extremist killed one person and injured four others in Paris. The worst attack in France’s history occurred in November 2015 at the Bataclan concert hall, when a strike by Islamic State-linked terrorists killed at least 130 people.