Home>News>Morocco IDs terror suspects in European tourist deaths
By AT editor - 20 December 2018 at 3:59 am 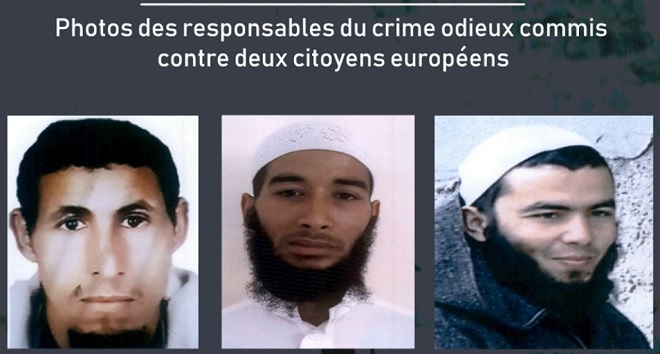 Moroccan police say one man is in custody as they continue the search for three other suspects in the deaths of two European tourists, killed in what they now confirm is a terror attack.

The bodies of the women, Louisa Jespersen of Denmark and Maren Ueland of Norway, were found in a remote area of the High Atlas Mountains near Imlil, a popular destination for hikers and backpackers about a 90-kilometer drive south of Marrakech.

The suspect in custody was found in Marrakech, authorities said. They later released images of the other three men, who are believed to have ties to radical Islam and “adopted extremist thought,” according to a press release from Morocco’s BCIJ.

Police late Wednesday said they are working to confirm the authenticity of a video shared on social media that claimed to show the gruesome deaths of the two women, both of whom were in their 20s. Sources said at least one of the women was beheaded, while Moroccan media outlets reported they were also sexually assaulted, but police have not yet confirmed those details.

The friends knew each other from university and planned their trip despite safety concerns, according to interviews with family members in the Scandinavian nations.

The deaths have shocked and saddened many Moroccans in a country that welcomes tourists and rarely sees attacks against them. The last such attack was the 2011 bombing in Marrakech.

Moroccans on Facebook launched a solidarity campaign with the European victims, displaying profile images showing the crossed flags of their countries, according to Chouf TV, and taking to Twitter to express their sorrow.