Home>In Depth>DR Congo: Opposition rages at exclusion of Beni, Butembo, Yumbi voters
By AT editor - 27 December 2018 at 6:43 am 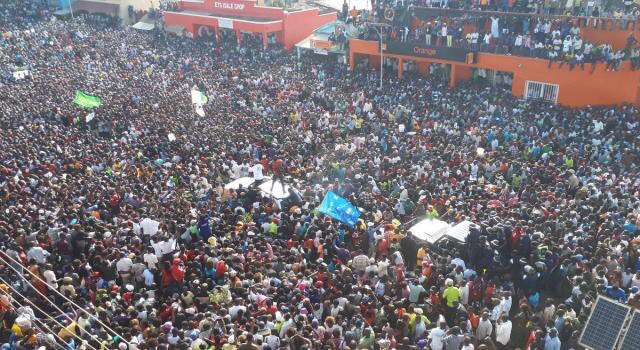 Congolese opposition politicians are crying foul after a national electoral commission (CENI) decision announced Wednesday that will exclude three large cities and some 1.2 million voters from Sunday’s elections, on the grounds that the Ebola outbreak and community violence pose too much risk.

CENI said that Beni, Butembo and Yumbi won’t vote until March, but the presidential tally – as opposed to the concurrent legislative and regional elections – will be counted without them, and an inauguration in January will move forward as planned before they ever go to the polls. That effectively disenfranchises voters in some areas of the Democratic Republic of Congo showing strong support for Martin Fayulu, who is backed by a “Lamuka” coalition that includes Moïse Katumbi’s Together for Change movement and Jean-Pierre Bemba of the Movement for the Liberation of Congo (MLC) party, both of them candidates who were banned from participation.

CENI leaders described the situation as unfortunate but unavoidable, according to local media reports.

Fayulu’s campaign said it will make a formal announcement Thursday on its path moving forward. In the meantime, Katumbi and others condemned the decision and accused President Joseph Kabila’s regime of using any excuse to facilitate a win for Emmanuel Ramazani Shadary. Shadary is a close ally of the outgoing Kabila and is the People’s Party for Reconstruction and Democracy (PPRD) candidate through the Common Front for Congo (CFC), which is backed by Kabila.

The DR Congo elections have been delayed since November 2016, and it’s been two years since Kabila’s second term expired. Yet he remained in office despite Congolese constitutional provisions, with delays in negotiating a path forward that resulted in violent clashes, fatalities and arrests. Kabila agreed in August not to seek re-election, but Shadary’s campaign has been given every advantage in terms of media access and approval for holding rallies, the opposition says. Kabila recently said he hasn’t ruled out a return to power, adding to concerns of a troubling transition.

The elections on Sunday were planned for December 23 but delayed by one week, after CENI president Corneille Nangaa cited technical and logistical problems following a suspicious warehouse fire in Kinshasa that destroyed most of the voting machines needed for the city, where one in four Congolese voters live. Opposition leaders have accused the government of using the fire as another excuse to block free, fair and credible elections. The machines have been highly controversial in DR Congo, because many voters and some candidates insist they can be manipulated to deliver a victory for Shadary. Now the CENI’s decision to prevent the vote in some regions has added more fuel to that fire.

“I warn CENI against any attempt to cancel the elections in Beni and Butembo,” said Fayulu. He said that using Ebola as a pretext to silence voters in the country’s east made little sense because the candidates campaigned there, drawing crowds of thousands without any concern over the outbreak. It’s yet another strategy to silence opposition voters at the ballot box, he said, and one Fayulu’s campaign rejects.

Katumbi, in support of Fayulu and his Engagement Pour La Citoyenneté et Le Développement (ECiDé) movement, condemned the decision and called the regional postponements unjustifiable. “This new maneuver shows that the regime wants to go on forever,” he said, pointing to the greed and corruption as a reason for Congolese to take matters into their own hands. “We will not offer any pretext to Mr Kabila to cancel the electoral process as he wishes,” Katumbi said.

ECiDé leaders in the North Kivu province say they’ve planned a protest march for December 30 in Beni and its region, including Butembo. They also noted there were just 38 Ebola cases in Butembo, downplaying the legitimacy of the government’s claim that it is too dangerous to have people at the polls.

As of Wednesday, the official numbers from the DR Congo Ministry of Health showed 39 cases there, with another 221 in Beni. A total of 534 confirmed or probable cases are in North Kivu as a whole. New cases continue to emerge, but health minister Dr. Oly Ilunga previously said the Ebola virus outbreak and response would not prove a barrier to the long-delayed elections being carried out there.

The region has long been a hotbed of armed conflict, but tragically the ethnic and political violence in the DR Congo has never been limited to North Kivu and Ituri. The Kasai provinces have been volatile in recent years, and the 2018 campaign-related clashes have been met with tear gas in Kinshasa and beyond. In Yumbi, at least 100 people died in communal violence reported in the country’s northwest last week, which was driven by political campaign alliances in an area with existing ethnic tensions. That’s the rationale for suspending the vote there.

Felix Tshisedeki, widely viewed as frontrunner in the pack of 21 opposition candidates and in alliance with Vital Kamerhe, said he plans to participate on Sunday despite the CENI decision. “I invite you to vote with your soul and conscience, because know that it will seal either the continuity of our sufferings, or the advent of a new era of change,” says the candidate. “An era of democracy, development, justice, health, peace and freedom.”

The status of DR Congo’s elections has remained a concern for the international community, from the Southern African Development Community (SADC) to the African Union to the United Nations Security Council. Although the voters eliminated in the affected regions represent just a fraction of the country’s 44 million registered voters, it’s hard to characterize the process as legitimate without them.