Home>News>Libya's Sarraj: No room for complacency after foreign ministry attack
By AT editor - 27 December 2018 at 4:06 am 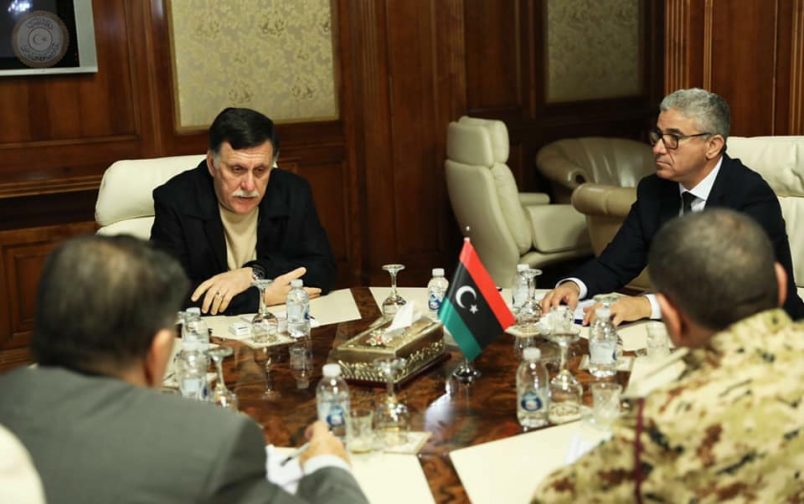 Libya’s Fayez Al-Sarraj, head of the Presidential Council for the Government of National Accord (GNA), met Wednesday with security officials and his interior minister to discuss Tuesday’s attack on the foreign ministry building in Tripoli.

The Islamic State group claimed responsibility for the attack, which killed at least three people while leaving dozens injured and the building in flames.

During the meeting, Al-Sarraj said there is no room for complacency while stressing the need to confront terrorists and criminals. He said the security services are working hard on the investigation, according to a statement from the GNA, the United Nations and Western-backed government in Libya.

The attack drew sharp condemnation from the UN, the United States and governments including Saudi Arabia.

“Terrorism will not triumph over the Libyans’ decision to move forward towards building their state and renouncing violence,” said Ghassan Salamé, the Special Representative of the UN Secretary-General in Libya and head of the UNSMIL mission. “We will not accept any attack on a state institution, especially one committed by a terrorist group. We will work with the Libyan people to prevent terrorist groups from turning Libya into a haven or an arena for their crimes.”

Elections that earlier this year were set for December 10 have been postponed until 2019 because of continued instability in Libya, which has seen a spate of terror attacks in recent weeks. The country remains divided politically, with the GNA based in Tripoli and the rival government of Khalifa Hafta, head of the Libyan National Army, based in the eastern city of Tobruk.

Italian Prime Minister Giuseppe Conte visited both leaders on Sunday, in the latest round of Italy’s efforts to negotiate a solution to Libya’s political impasse.