Home>News>Historic South African town destroyed by fire
By AT editor - 31 December 2018 at 9:06 pm 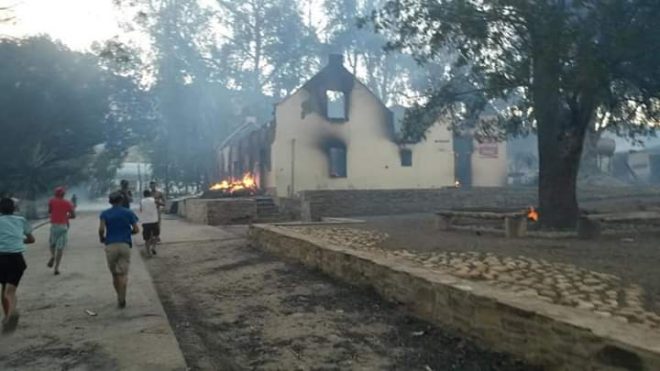 In South Africa, a devastating fire that swept through the historic town of Wupperthal in the Western Cape region has left some 200 people homeless.

Sunday’s fire at the town, built around a Moravian church mission station, claimed dozens of homes, the town hall and a clinic, according to former Cape Town mayor Patricia de Lille. The dormitory that’s used to house 220 students at the mission school also was destroyed, as was the minister’s home.

“Many of the people living in the Wupperthal town are elderly,” said de Lille, who thanked neighboring communities for their help through GOOD, a new political party she established earlier this month.

Rev. Martin Abrahams said 55 homes, a shopping center and restaurant also were destroyed in the blaze. There were no immediate reports of injuries or fatalities as the fire remains under investigation.

South African President Cyril Ramaphosa also extended his condolences, saying he was saddened by the tragedy in a New Year’s Eve statement.

“The nation’s thoughts go out to the people of Wupperthal who have suffered terrible personal losses alongside cultural assets that are of importance to all South Africans and especially Moravian congregations across the Western Cape,” said Ramaphosa.

Wupperthal was founded as a Christian mission in 1830, and is a center of tourism in the region. It is a part of the Cederberg municipality.