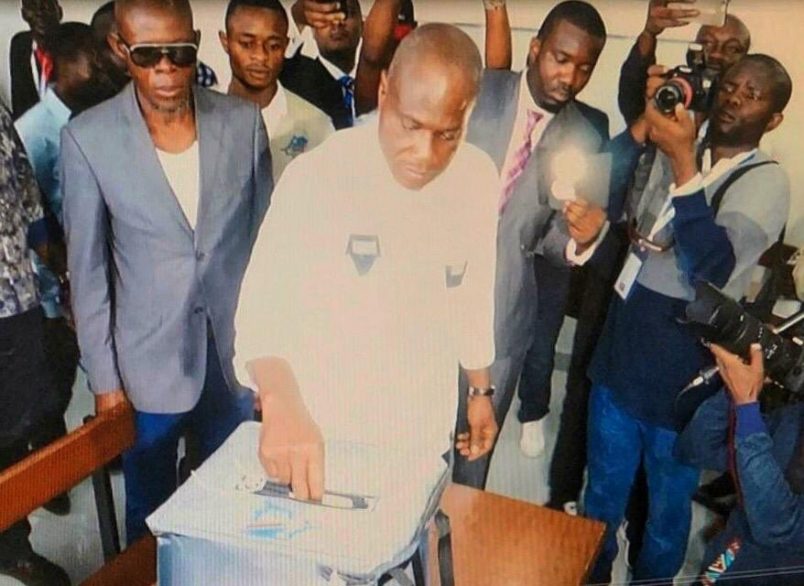 Two years ago on New Year’s Eve, the Democratic Republic of Congo finally saw a breakthrough in the political impasse that pitted outgoing President Joseph Kabila against opposition leaders who demanded elections. Kabila, having reached the end of his constitutionally limited second term, agreed to a deal brokered through CENCO, the organization of DR Congo’s influential Roman Catholic bishops. It became known as the New Year’s Eve agreement.

Much has changed since that night. The Rassemblement coalition that once envisioned 84-year-old Etienne Tshisekedi as its leader was forced to realign its expectations when the longtime head of the Union for Democracy and Social Progress (UDPS) party died in Brussels in February 2017. The one-year transition to deliver elections later that year, agreed to by a defiant Kabila, was delayed more than once.

A year ago on New Year’s Eve, people died in the streets of Kinshasa amid attacks on Roman Catholic churches as anti-Kabila protesters demanded change. Priests were beaten and arrested alongside their congregation members as military forces entered the church sanctuaries. Tshisekedi’s son, Felix, was met with tear gas as he arrived for services at Notre Dame Cathedral in the Congolese capital. The political violence continued a pattern that saw dozens of fatalities from Kabila’s 2016 refusal forward.

This year, on the final night of 2018, the Congolese were counting ballots to elect a president who won’t be Kabila, although his handpicked successor Emmanuel Ramazani Shadary – a man who remains under European Union sanctions for alleged human rights violations – may yet carry the day. Congolese officials expelled EU ambassador Bart Ouvry last week in retaliation for the sanctions, which followed Kinshasa’s refusal to allow EU election observers in the country. EU foreign affairs chief Federica Mogherini called the Ouvry incident arbitrary and unjustified as the EU reiterated its expectation for fair elections.

On this New Year’s Eve, CENCO was demanding that the national election commission (CENI) permit independent observer access to centers for processing results, where the tallies were already under way. They appealed for calm as Congolese waited for answers amid reports of irregularities and concern over violence.

“The years pass and are not alike,” a translated CENCO statement said. “The year 2018 ended with general elections, the results of which will be known in a few days. At the beginning of the year 2019, we will know our next President of the Republic who will be, we hope, the choice of the people and not a product of electoral tricks. This will be a new start for every Congolese.”

Much of the international community shares the CENCO hopes, and the people of Beni and Butembo served as an inspiration. After Wednesday’s last-minute announcement that they would be excluded from officially voting for president – ostensibly because the Ebola virus outbreak created too much risk – they organized the polls themselves. Congolese voters in these opposition strongholds stood in long lines to write in their choices on scraps of paper, in hopes their voices will matter.

“I will remain touched for a long time by the symbolic act of my compatriots in Beni and Butembo,” said presidential front-runner Martin Fayulu on Monday, who enjoyed support from the eastern regions. The Engagement for Citizenship and Development (ECiDé) party candidate is backed by the “Lamuka” coalition, which evolved from the failed candidacy attempts of Moïse Katumbi and the  Together for Change movement and Jean-Pierre Bemba of the Movement for the Liberation of Congo (MLC), among others. That these candidates were barred from entering the race added yet another question mark to the legitimacy of the Congolese elections, and those concerns continued with the CENI decision to block the vote in the North Kivu regions where Fayulu has held the advantage.

The Congo Research Group (CRG) published survey results just two days before the election, which showed Fayulu with a commanding lead at 47 percent. Shadary held just 18 percent, while Felix Tshisekedi – once envisioned as the natural successor to his late father – was between them at 24 percent. The UDPS leader, running on an alliance ticket with Vital Kamerhe of the Union for the Congolese Nation (UNC), originally supported Fayulu in November but walked back his commitment to run his own campaign.

“This is an astounding rise in popularity and prominence for a politician who was barely known outside of Kinshasa a year ago,” the CRG said of Fayulu, who was himself beaten during last year’s protests and is seen by many voters as a man of the people. His rise came with a concurrent drop in approval for Tshisekedi and Kamerhe, whose decision to not support the Lamuka coalition may have cost them.

So far the expected trends appear to hold true, as Lamuka on Monday said Fayulu was clearly in the lead with about a third of the votes counted. Tally sheets from Goma, posted by Lamuka on social media, appeared to show the candidate with a runaway lead but it will be days before CENI announces final results. It also remains to be seen how Shadary and the Kabila-backed Common Front for the Congo (FCC) coalition – claiming their own sure victory – will respond.

The elections, like the past two years, have seen politically motivated violence that continued into recent weeks. The potential for more remains high, according to the CRG. Roughly half of Congolese voters in the poll said they will protest “rigged elections,” refuse to accept a Shadary win, and don’t trust the courts to fairly resolve any electoral disputes. There were already signs of trouble, with four deaths reported at a South Kivu polling station – an area seen as favorable to Tshisekedi – and claims from Lamuka that an ongoing Internet shutdown could facilitate fraud.

Despite the uncertainty, the CENCO bishops were right. This New Year’s Eve in DR Congo was different, and there is room for a guarded hope that the Congolese future will be too.