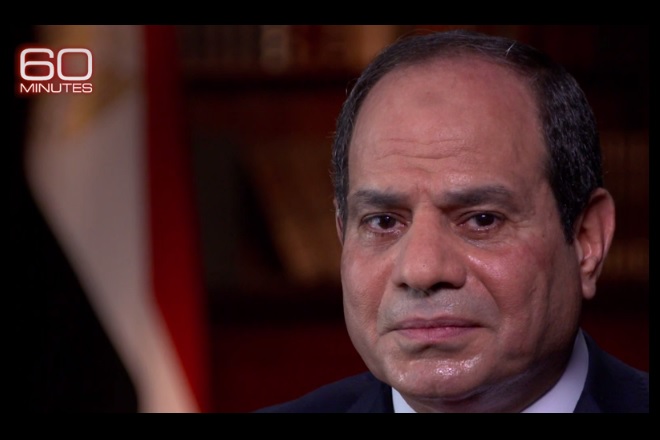 The CBS investigative news program “60 Minutes” in the United States says it’s going ahead with its interview of President Abdel Fattah el-Sisi of Egypt, despite Cairo’s request to kill the segment.

Sisi recently sat down with journalist Scott Pelley to record the interview, confirming that the Egyptian military is working with Israel against extremists in North Sinai. The Egyptians are fighting an estimated 1,000 Islamic State-linked terrorists with assistance from Israelis providing air attacks; Egypt has long denied that is the case.

“But other questions, including jailing his opponents to maintain his regime and the massacre of 800 civilians by Egypt when he was Defense Minister were not the kind of news his government wanted broadcast,” the media outlet said Thursday. “The 60 Minutes team was contacted by the Egyptian Ambassador shortly after and told the interview could not be aired.”

The interview will be broadcast nonetheless at 7 p.m. Eastern on Sunday, the regular time slot for the well-regarded “60 Minutes,” which marked its fiftieth year in 2017.

Sisi wavered over questions about human rights and political prisoners, and his own role in the deaths of Muslim Brotherhood supporters killed in 2013 during his tenure as defense minister.

In 2017, Human Rights Watch estimated that el-Sisi was holding 60,000 political prisoners and dissidents who are tortured and killed. “I don’t know where they got that figure. I said there are no political prisoners in Egypt,” Sisi said in response to Pelley’s questions on it. “Whenever there is a minority trying to impose their extremist ideology we have to intervene regardless of their numbers.”

Egypt has consistently denied charges of human rights abuses in the American media, including those leveled by the U.S. government itself. Foreign Minister Sameh Shoukry, speaking with PBS News Hour two years ago, also told journalist Judy Woodruff that there was no suppression of dissent.

A preview of the Sisi interview is available here.