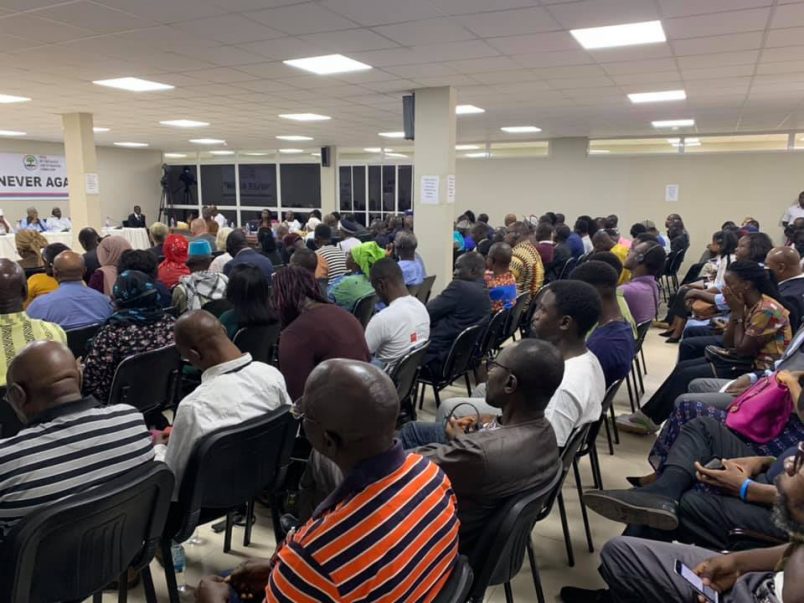 President Adama Barrow of The Gambia welcomed on Monday the start of hearings by the country’s Truth, Reconciliation and Reparations Commission (TRRC), formed to explore human rights violations that occurred during the 22-year rule of former dictator Yahya Jammeh.

“As a key pillar of the transitional justice program of the Barrow administration, it is an important milestone in our collective quest to seek the truth, ensure justice and reconcile our differences as a nation,” Barrow said in a statement. “It is a historic journey that will undoubtedly help the country’s cause to document the full extent and true account of human rights violations and other unspeakable atrocities of the former regime.”

Members of the commission, headed by Lamin Sise, were sworn in at its headquarters in Kotu on October 15. They began the hearings before a packed and standing-room-only crowd at 10 a.m., the start of a two-year process meant to ensure justice for victims of the torture, detention, and extrajudicial killings that marked Jammeh’s rule.

At least 1,000 victims have registered with the Gambia Centre for Human Rights Violations to share their stories, and photographer Jason Florio is working with the center on a photo gallery and profiles of those journalists, activists, politicians and other Gambians, including Jammeh family members. Their images and stories are available online here.

Among them is Sainey Marenah, a Gambian journalist whose story about young opposition supporters for The Standard landed him in jail. Harassment and death threats from Jammeh’s National Intelligence Agency (NIA) didn’t stop after his acquittal, so he lived in Senegal in exile.

Jugano Susso has difficulty walking because of beatings and torture at the hands of Gambian security services in the Jammeh era. Dodou Sanyang represents his mother, who was accused of witchcraft and rounded up with 1,000 other Gambian seniors in 2009 before living until her death with illnesses related to torture. Others were victims of Jammeh’s claim to a cure for HIV who suffered under his “scientific” whims.

‘Anger that will not relent’

Portraits of some of the more prominent Gambians include Fatoumatta Sandeng, the daughter of opposition politician Solo Sandeng. His body was found in a shallow grave in March 2017, nearly a year after Sandeng – who was then leading the challenge against Jammeh ahead of elections that Barrow subsequently won – disappeared. The fate of the United Democratic Party (UDP) leader was, in some respects, a catalyst for the regime change that finally came to a long-outraged Gambian people.

“What they did to Solo, they created an anger that will not relent,” Fatoumatta said. That anger has never subsided though, with few exceptions like the 2018 Faraba Banta incident, Gambians have maintained a commendable peace. “The change of government last year sparked off a lot of political agitation and activity, which continue to gain momentum in the country,” Barrow said at the new year, appealing to his young democracy. “Nevertheless, the debates and discourses that underlie political activities should be decent, constructive, positively productive and unifying.”

Jammeh was forced from the West African nation in January 2017 after weeks of refusing to honor Barrow’s electoral win, and remains in exile in Equatorial Guinea. He withdrew at least USD$50 million in state funds ahead of his departure, among other alleged financial crimes investigated in The Gambia. That’s resulted in Western sanctions against him and his family members, but also extensive financial commitments from the European Union and others in the international community. Banjul remains mired in debt; the International Monetary Fund (IMF) said in May that The Gambia’s debt had risen to 130 percent of GDP, half of which was owed to external creditors. There are signs of recovery, with a higher growth rate at 3.5 percent and lower inflation, but finding the funds needed to rebuild the country – including the truth and reconciliation process itself – remained a daunting challenge.

Barrow, in his end-of-year address, cited the TRRC among the nation’s achievements as it emerges from the economic and social grip of Jammeh’s legacy.

“Unfortunately, 2017 had bleak undertones. We came face-to-face with the realities of the economy; uncovered how the national wealth was plundered; and, sadly, discovered the nature and extent of the horrible crimes that were committed against the citizens of this country,” Barrow said. “The revelations and facts were terrible. With much relief, 2018 will be remembered in the years ahead as the year we broke down barriers and unlocked the doors to success, progress and development.”

Gambian human rights organizations, however, have pressed for a more swift justice that avoids the pitfalls of having a nonbinding process – which they warn is the case in The Gambia – without addressing impunity. The Solo Sandeng Foundation and others cited Liberia’s experience as an example in a December 2018 statement that expresses concern over TRRC hearings that have no consequences. It followed the withdrawal of charges against some NIA members accused in Sandeng’s death.

“Almost ten years after the Liberian Truth and Reconciliation Commission made its recommendations, victims of the atrocities committed are still waiting for justice because the Liberian government has failed to act upon them,” the organization’s joint statement said.

Barrow has promised meaningful action. Gambian justice minister Aboubacarr Tambadou has vowed the same. The hearings have begun, and now it’s time to hear the voices of Jammeh’s victims.