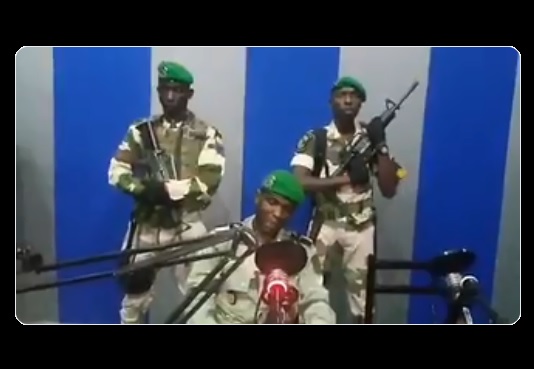 There were troubling reports from Gabon early Monday – and concerns over a coup – as soldiers took over national radio to announce their disappointment with President Ali Bongo’s New Year’s Eve message to the nation, and their demands for a “restoration council.”

There were unconfirmed reports from Gabon’s media outlets of shots fired in the center of Libreville, followed by word that the Radio Gabon signal had been cut. The government said that order was restored a few hours later, and the small contingent of military officers responsible had been arrested.

Bongo remains hospitalized in Morocco after falling ill while attending the “Davos in the Desert” investment forum in Saudi Arabia on October 23. He was taken to King Faisal Hospital in Riyadh, where he remained until accepting an invitation from King Mohammed VI to complete his extended recovery in Rabat.

The country’s vice president, Pierre Claver Maganga Moussavou, took over on November 16 in a move facilitated by Gabon’s high court, which changed the constitution to allow for the interim leader. That decision was rejected by opposition parties who warned of a political and constitutional crisis, some of whom never acknowledged the legitimacy of Bongo’s victory in a bitter 2016 contest that brought violence to the West African nation.

Moussavou confirmed in early December that Bongo had suffered a stroke, ending weeks of speculation about Bongo’s condition. The opposition claims Bongo is no longer fit to lead.

The New Year’s Eve message was Bongo’s first public speech since the medical crisis. He touched on economic policies enacted in 2018 before acknowledging that there has been much speculation about his health, and assuring citizens in his West African nation that he is making progress in his recovery and remains fit to serve as president.

The United States announced late Friday it had placed U.S. troops in Libreville ahead of potential electoral violence in the Democratic Republic of Congo.