Home>Articles>Malek wins Golden Globe best actor for 'Bohemian Rhapsody'
By AT editor - 7 January 2019 at 7:57 am 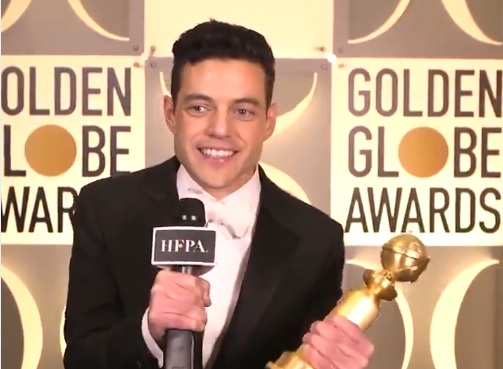 Egyptian American actor Rami Malek received a Golden Globe award Sunday night for best performance by an actor in a motion picture, drama, for his portrayal of music legend Freddie Mercury in the movie “Bohemian Rhapsody.”

Malek also celebrated the film’s selection in the Best Motion Picture – Drama category. It edged out four other contenders including the much-loved “Black Panther,” the first comic-based film to ever be nominated in the category, starring Zimbabwean Danai Gurira and Kenyan actor Lupita Nyong’o.

Malek accepted his award praising the late musician and the band Queen, which had two of its original members – Brian May and Roger Taylor – in the audience at the awards ceremony in Los Angeles. He thanked them for “ensuring that authenticity and inclusivity exist in the music and in the world and in all of us.”

The 37-year-old Malek was favored to win the best actor award, determined by the Hollywood Foreign Press Association. “It was a euphoric feeling,” he said. “To share this with Queen is like, it’s an out of body experience. People say that all the time but it’s true.”

His previous accolades include a Golden Globe for the “Mr. Robot” television drama series, and an Emmy best actor nod for the same show in 2016  – the first awarded to a non-white actor in 18 years. It’s also received a prestigious Peabody Award.

Malek was born in the United States to parents who were Egyptian immigrants from Samalut and spoke Arabic at home; he charmed fans with attempts to speak some Arabic during a BBC interview in 2017.