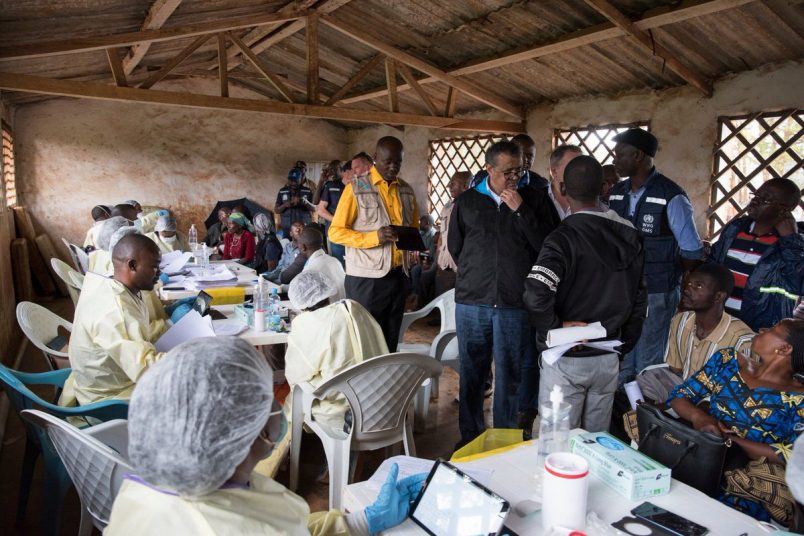 The Ebola outbreak in Democratic Republic of Congo has now claimed 385 lives, with the number of cases reported Thursday by the country’s Ministry of Health rising to 630.

The new total in what is now the second-largest Ebola outbreak in global history, after the 2014 West African outbreak, includes 582 confirmed cases and 48 probable. Another 122 suspected cases are under investigation in the country’s conflict-torn North Kivu and Ituri provinces, nearly half of them in Beni.

Among the more worrying trends has been the report of suspected cases in Goma, on the border with Rwanda and not far from Uganda. The ministry listed up to 10 suspected Ebola cases in Goma last week, but the virus was ruled out and there are now no cases confirmed in Goma so far.

Health officials have been ramping up preparation efforts ahead of any Ebola cases there, and the virus presence in Goma would realize their worst fears.

“If it hits Goma, we’re done for,” said Dr. Jean-Christophe Shako, the director of a local Ebola response team, in a New York Times interview. That’s because the travel and trade hub, as described by the World Health Organization, opens the door to more regional and international spread. The WHO already mapped 11 high-traffic locations in the city and placed entry control points there.

Vaccinations in Goma, as in Beni, Butembo and other cities hit by armed militia attacks and more recently electoral violence, have been interrupted by these incidents but the work continues. More than 58,000 people have received the approved rVSV-ZEBOV experimental vaccine, nearly 20,000 of them in Beni.

Beni and Butembo, and more recently Katwa and Komanda, remain hotspots in the Ebola outbreak. Vuhovi has now seen eight confirmed cases, three of them fatal. A new fatality also was reported in Biena.

A WHO response update issued Tuesday said 55 health workers are now infected, with 18 fatalities among them.

WHO Director General Tedros Adhanom spent time with Ebola response workers in DR Congo at the new year. “I’m concerned about the impact of the recent disruptions at this critical moment. This outbreak is occurring in the most difficult context imaginable,” he said. “To end it the response needs to be supported and expanded, not further complicated. Ebola is unforgiving, and disruptions give the virus the advantage.”