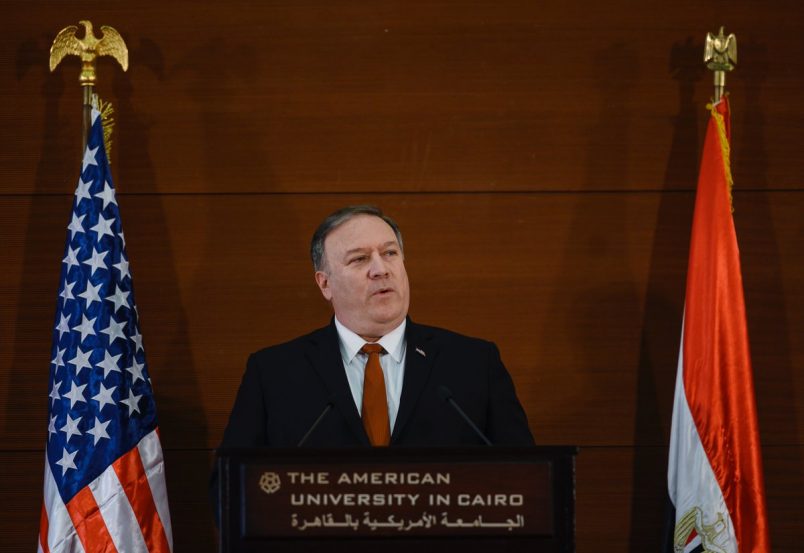 United States Secretary of State Mike Pompeo targeted Iran in a speech delivered Thursday at the American University in Cairo, but he was equally forceful in describing the U.S. role and the failings of former U.S. President Barack Obama to confront the threats in the Middle East and North Africa.

“President Trump has reversed our willful blindness to the danger of the (Iranian) regime and withdrew from the failed nuclear deal, with its false promises. The U.S. reimposed sanctions that should never have been lifted,” Pompeo said. “We embarked on a new pressure campaign to cut off the revenues the regime uses to spread terror and destruction throughout the world. We joined the Iranian people in calling for freedom and accountability.

“And importantly, we fostered a common understanding with our allies of the need to counteract the Iran regime’s revolutionary agenda,” he continued. “Countries increasingly understand that we must confront the ayatollahs, not coddle them. Nations are rallying to our side to confront the regime like never before. Egypt, Oman, Kuwait, and Jordan have all been instrumental in thwarting Iran’s efforts to evade sanctions.”

Pompeo praised Egyptian President Abdel Fattah el-Sisi for his courage in confronting the “ugly reality of radical Islamism” and “denouncing the twisted ideology which has brought death and suffering on so many.”

Pompeo emphasized the U.S. role in building coalitions and the need for regional cooperation, which is at the core of his current diplomatic mission. He is visiting nine states, beginning with Jordan and Iraq before heading to Egypt. He next travels to Bahrain.

The full text of Pompeo’s speech is available here.