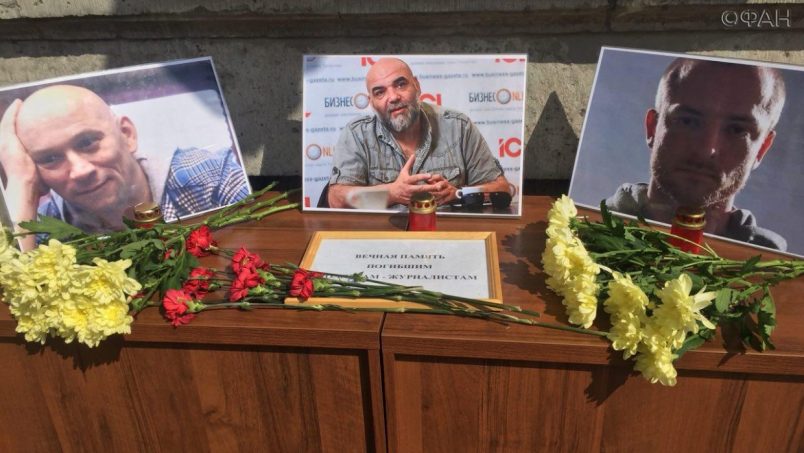 Authorities in Russia insist the deaths of three investigative journalists in the Central African Republic happened because the Investigation Management Center they were working for failed to provide them with adequate security – a claim that counters a newly released report that ties Russian oligarch Yevgeny Prigozhin and the private military Wagner Group to their deaths.

The TASS news agency said Friday that the Russian Investigative Committee findings on the deaths of Kirill Radchenko, Alexander Rastorguyev, and Orkhan Dzhemal documented the crew’s own errors, and those of Russian exile Mikhail Khodorkovsky and his media outlet, as the reason they died in a robbery-related road ambush. The Russian government has consistently held to this explanation since the bodies of the three experienced journalists were found near the CAR town of Sibut in July 2018.

“It must be said that by initiating media reports on the matter, the Investigation Management Center project clearly seeks to justify the mistakes it made during preparations for the trip, this is why it prefers to put forward its own theories and accuse the innocent,” said Svetlana Petrenko, a Russian committee spokeswoman speaking with TASS.

The response comes as Khodorkovsky, an outspoken critic of Russian President Vladimir Putin and his allies, presented on Thursday the results of an independent investigation conducted in partnership with his new Justice for Journalists initiative. That report concludes that CAR security personnel were complicit in the deaths of a reporting team that was investigating the Russian mercenary presence in the country, financially backed by Prigozhin and with evidence of his involvement.

“The investigation unambiguously demonstrated that this murder was professionally planned in advance and carried out with the participation of law enforcement officers of the Central African Republic,” the Khodorkovsky organization said, adding the culprits were in constant contact with Prigozhin’s people. Their evidence points to the involvement of a local policeman, a security instructor for a finance company, and the security adviser to the president of the Central African Republic, Valery Zakharov.

The Justice for Journalists group asked the United Nations human rights agency and MINUSCA, the UN mission in CAR, to conduct an independent investigation into the killings.

“I am convinced that the murder of journalists was the result of Prigozhin’s attempt to find out what the group, and specifically Orkhan, has on the illegal arms trade and the illegal preparation and use of Russian mercenaries, as a result of an investigation in Russia,” said Khodorkovsky in a statement.

The Wagner Group presence on the African continent – and more broadly, that of Russia – has come under renewed scrutiny following reports that the private military group is supporting Sudan security forces confronted with nationwide protests. They’ve been identified in Sudan previously.

Prigozhin also is under investigation in the United States for links to Russian meddling in the country’s 2016 elections.