Home>African Future>Africa's front and center at Abu Dhabi Sustainability Week
By AT editor - 15 January 2019 at 6:37 am 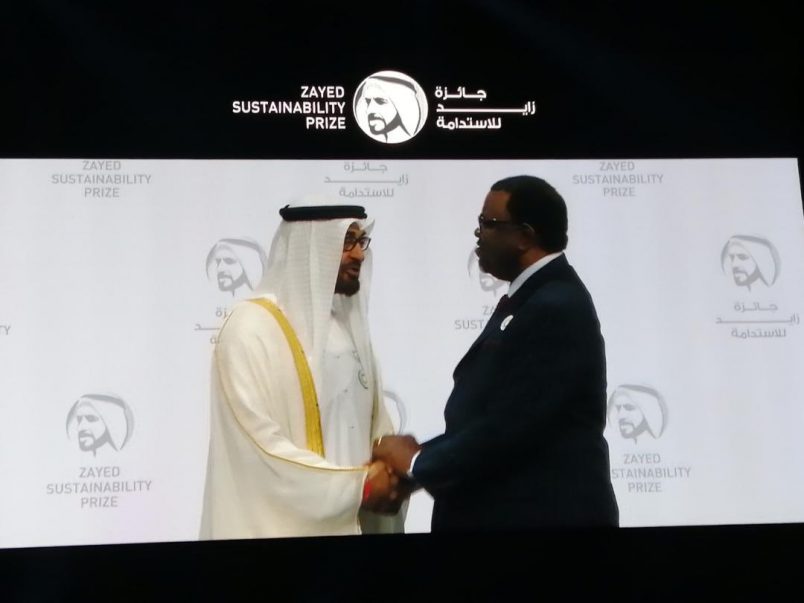 The Zayed Sustainability Prize awards ceremony was held in the United Arab Emirates on Monday, with Sheik Mohammed bin Zayed attending the honors as part of Abu Dhabi Sustainability Week.

The week-long conference on renewable energy, sustainable finance and other climate-focused topics is attended by a number of world leaders. The presidents of Angola, Uganda, Mauritania and Namibia, above, are among those already in the UAE for what it says is the largest sustainability event in the Middle East.

The event puts climate change at the forefront and follows the International Renewable Energy Agency (IRENA) general assembly, which just ended in Abu Dhabi. It kicked off with a message from Chinese President Xi Jinping.

Yet Monday belonged to the 10 winners of the prize, from among more than 2,000 submissions – and African initiatives figured prominently.

In the schools category, with six winners across their respective continents, the African Leadership Academy outside Johannesburg won for sub-Saharan Africa. That’s for the school’s impressive greywater treatment system, and its implementation of solar power sources.

The food prize went to Sanku, an international nonprofit with offices in Tanzania serving five East African nations. Its mission is to address malnutrition with small-scale fortification projects.

In energy, the winner was BBOXX, which has brought electricity through solar energy to 675,000 people across Africa. The water prize went to Singapore-based ECOSOFTT for its work in delivering sustainable water systems across Southeast Asia.

To follow more from this week’s Abu Dhabi event, check this link.